by Amanda Peterlin 9 years ago10 months ago

The struggle is real. Many cringeworthy moments in the YouTube video above titled “Worst Wheel Of Fortune Contestant Ever” that was posted only three days ago and has over 2 million views. A really big name to hold for the University of Indiana freshmen and honors student Julian Batts.

On “Wheel Of Fortune” last week, Batts had three separate attempts to solve puzzles. One of his attempts had every letter visible and only needed a correct reading of the phrase. Mythological Greek hero Achilles is shaking his fist and keeps repeating “Why” in a faint whisper. Batts tried to pronounce Achilles but it was if he wanted to emphasize how “chill” it was to be a contestant during College Week. Good bye chance to win a million dollars. 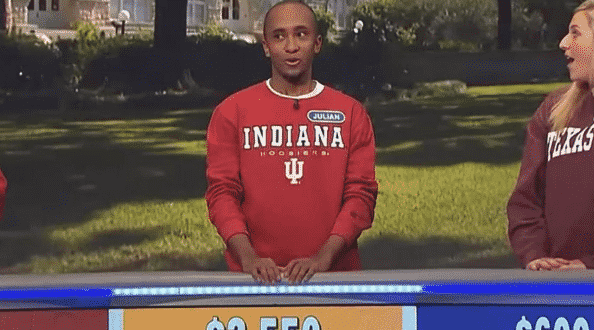 Those facial expressions speak for themselves.

Julian continued on receiving both “1/2 Car” pieces but threw them out the window, figuratively of course. He would need a full car to toss them out a window. Poor Julian was so focused on winning the car he thought his puzzle was “World’s Fastest Car” rather than “World’s Fastest Man.”

The last puzzle had the most creativity. Instead of the correctly saying “On-The-Spot Decision,” Julian shouted “On-The-Spot Dicespin.” See ya later trip to Jamaica. At some moments, you just want to give him a hug. Especially when Julian watches the Texas A&M contestant pick up his slack and rack up the dough.

Even though Julian rode the struggle bus hard for a few television moments, he ended up winning the episode. Host Pat Sajak said, “I don’t think anyone has ever taken a more circuitous route to victory, but the important thing is you’re here and you’ve got $11,700 dollars and we’re pleased about that.”

Julian is proud of his performance and talked about how it was a dream to be on the show.