KFC Chicken Corsage Is A Real Thing Available For Purchase

by Amanda Peterlin 8 years ago3 weeks ago

#HowDoYouKFC? Normally in the privacy of my own home where I can unhinge my jaw and just drop fried chicken down my throat in peace. But right now, there is another option targeting all high school students attending prom.

KFC has launched a new promotion called #HowDoYouKFC which brings together one old tradition of buying your date a corsage with a new tasty addition. A piece of fried chicken right on top of the flowers. As of right now it is just for a corsage, no boutonniere friend chicken pieces have been created. 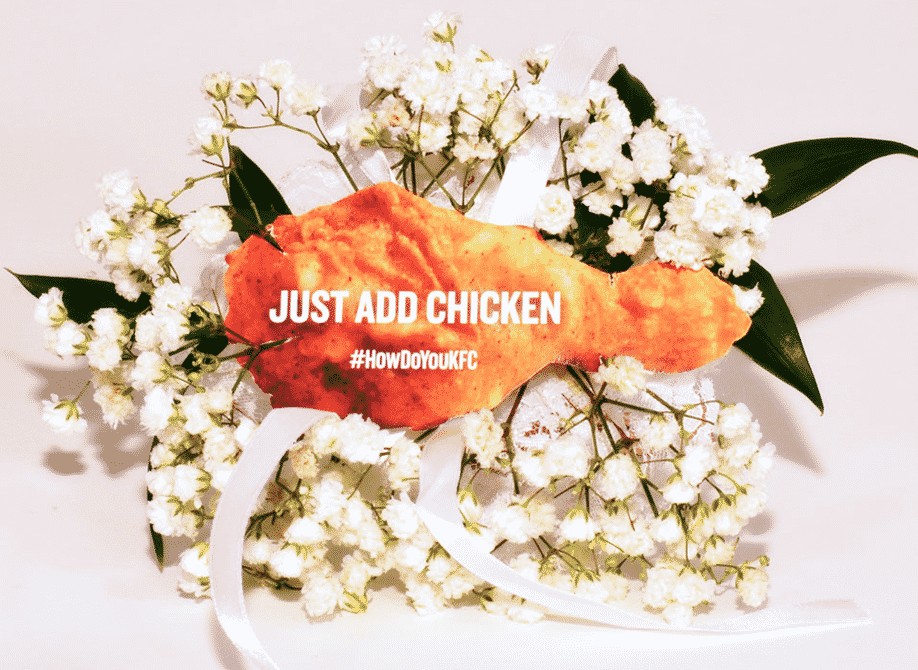 Again, this is a real thing that you can actually buy online for the small price of $20. The Nanz and Kraft Florists from Louisville, Kentucky will send you a corsage kit that includes a $5 gift card to purchase the drumstick of your choice. Drumstick options include: “Original Recipe, Extra Crispy or Kentucky Grilled Chicken and fresh baby’s breath.” There are only 100 chicken corsages available, time is running out to eat and party at the same time.

KFC created a YouTube video on April 9th showcasing the new product which has been viewed over 250,000 times. The official KFC Twitter account is retweeting anyone who has purchased the Chicken Corsage for one unforgettable and tasty night.

well, you guys, i did it: i ordered a @kfc fried chicken corsage.

So this happened yesterday.. Got a #promposal with a chicken wing! Best thing ever. Thanks @kfc ! #PutAWingOnIt pic.twitter.com/VJaBiMLJXv

Thank you @kfc for asking me to prom with a chicken corsage. #putawingonit pic.twitter.com/2ozjt2K0Fl