Having a hard time gaining engagement on your Facebook page? You might want to consider using more photo posts. A new study by SocialBakers finds that Facebook photos still receive the highest level of engagement among all forms of posting on the network.

Video and Albums receive a very low (3–4%) of total interactions, while links and albums fair slightly better at 4%. Photo engagement is far superior at 87% of all interaction. 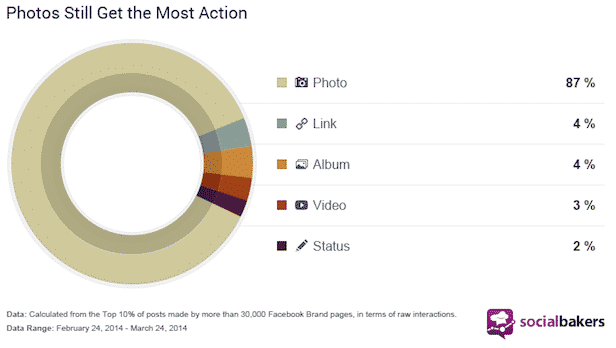 Keep in mind that the SocialBaker study does not claim that your Facebook photos will deliver guaranteed engagement, only that photos once engaged with, tend to lend themselves to more likes, comments, and shares.

We live in a visual web and this study once again proves that Facebook photo posts are still an incredibly important strategy for page administrators.