Klout on Wednesday revealed several new enhancements to its Perks program, including an updated iPhone app and the addition of a new Passbook card for iOS 6 users.

The perks program has become more catered to individual users but still includes free products and early access to websites.

Several weeks ago the KloutPass SDK was made available and through that system users can now select at least some of the Perks they want to accept based on their influence score.

The first company to take advantage of the KloutPass SDK is 500px, a company that lets users buy and sell photographs. Users with a Klout score of 90 or more can receive a 100% discount on their purchase.

Thanks to an iPhone app upgrade Klout Perks can also now be claimed from the users smartphone. Push notifications now also tell users when they have a perk available to them. Directly from the iPhone app users can then choose to check out details for the Perk and claim it directly from their iPhone.

Also featured is a new Passbook card that displays the users name, Klout score and a scannable QR code which can be used for local business deals via Klout.

One of the best features might be the Klout wait-list which puts users on a Perks list once the deal is already full. If a spot for the Perk becomes available the Klout user can claim that spot.

Will you be taking advantage of the new Klout Perks updates? 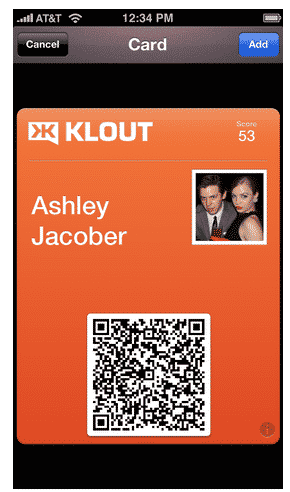