A current trend on Twitter is giving advice on remaining cool without lighting up. This prime example of social activism via internet just may relieve your next awkward “pot or not” encounter. Who knew life changing guidance could be under 140 characters?

The hashtag #CoolWaysToSayNoToPot became a United States Top Ten trend on twitter and has been steadily climbing. The internet is a great place to check symptoms, procure a hot date, and get life advice from individuals all over the world who come from different walks of life. 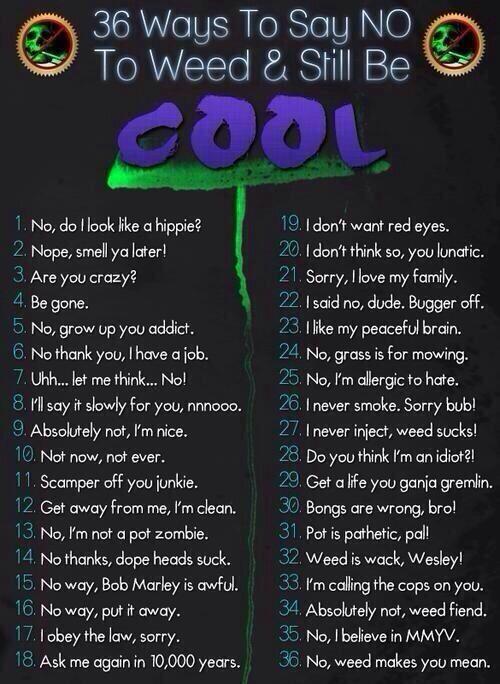 Unfortunately I haven’t had the pleasure of running into any “pot zombies” or “ganja gremlins” but the day is still young.

Highly doubting any people taking part in this trend currently reside in Colorado, but it’s cute that they try. Some tweets are probably exactly how people feel and to see the truth behind the tweet is slightly uncomfortable.

Have no fear! 2014 intellectualism arises below. These tweets prove Twitter is full of meaningful and intelligent exchange between strangers:

#CoolWaysToSayNoToPot Look your bag of weed right in the eye and give it a stern "No".

#CoolWaysToSayNoToPot "grow up and do cocaine like an adult"

What are your cool ways to say no to pot? Tweet us @SocialNewsDaily with your best, or perhaps worst, response.