eBay has for the first time started selling virtual currencies, and one of the most popular listed currencies on launch is Dogecoin.

Virtual currencies currently listed for sale on eBay includes the better known Bitcoin, Litecoin, Zetacoin and of course Dogecoin. Along with the electronic purchase of the digital currencies, there were also several listings for physical Bitcoins.

For those not aware of virtual currencies, they exist strictly on the internet and hold value only due to a belief in their existence. Currencies such as Bitcoin (and copies such as Dogecoin) have a set amount that can possibly exist, and along with an open market exchange must be “mined” through the use of computer programs, or in the case now of Bitcoin, server farms. 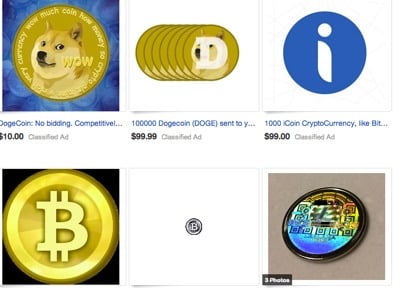 Dogecoin was launched in 2013, originally off the basis of a joke by an Australian Twitter user. The currency, unlike Bitcoin, is available in its billions, and doesn’t have a large value. However the joke has actually turned into a serious movement, with Dogecoin being traded openly on cryptocurrency exchanges, and perhaps more surprisingly growing in real world value.

Support for Dogecoin has been strong on Twitter and social media, given the idea evolved from a Tweet.

The eBay virtual currency market can be found here.