by Duncan Riley 8 years ago2 months ago

Goat Simulator, a new game that alleges to simulate the life of a goat has gone viral as word of its “interesting” gameplay spreads.

The game is probably best described as a goat meets Grand Theft Auto.

The game runs on a basic physics engine that is set up to show a generic suburban landscape, and features you as the goat exploring various aspects while causing mayhem.

The goat can seemingly climb towers (goats can climb anything IRL, but they don’t climb this way) chase cars, throw objects, attack and throw people and more. 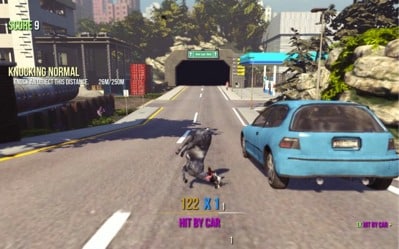 Did we mention that the goat can also bounce on trampolines, ride water slides, and head butt a car until it explodes?

The concept behind the game may have started as a joke, but as word of it spreads online it may turn out to be a serious success. Even some serious games sites have rated it well, noting that while the game is basic, it’s seriously fun basic.

You can buy the game on the Goat Simulator site for $9.99 or from Steam.

Goat Simulator was the third most search for term on Google April 2nd.