by Duncan Riley 8 years ago2 months ago

A Louisiana teacher received an interesting surprise from Starbucks last week when her coffee was delivered complete with satanic symbols.

As per the picture above, one cup featured a pentagram, the other stated 666, both satanic symbols.

Megan Pinion’s reaction naturally was to post a picture of the coffee on Facebook along with a complaint.

As opposed to accepting the coffee as the completely harmless prank it was, Pinion instead turned it into an attack on her religious beliefs.

“I am a teacher in the public school system and if I were to present a child of atheist or pagan believers with a Christian art project I could be sued in a heartbeat,” Pinion said. “I am of Catholic faith and would love to share in my beliefs daily. Fortunately I have enough common sense to present myself with professionalism and follow an ethics code. Perhaps that could be suggested to that particular location.” 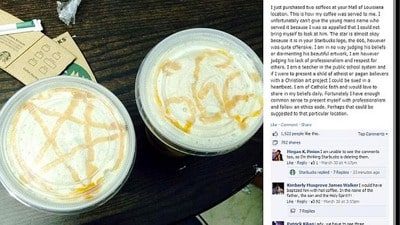 Naturally she was so shocked by the horror of the satanic symbols, she couldn’t even bring herself to identify the employer who served her.

“I unfortunately can’t give the young man’s name who served it, because I was so appalled that I could not bring myself to look at him.”

Starbucks has apologized to Pinion, telling The Raw Story that “We reached out to her through social media and apologized..We’re taking the complaint seriously. We’re not sure who served her or what kind of beverage it was. It looks kind of caramel-ish in the photos.”

We can help Starbucks with which beverage it is: it’s clearly a satanic one 🙂