First, let’s start by saying that in campers, two different types of batteries are typically mounted: starter and service. The starter battery is the one that, in a nutshell, is used to start your vehicle’s engine. The service battery, on the other hand, is the one that allows all the utilities of your camper to function correctly.

But that’s only partly because, in turn, the batteries, particularly the service batteries, can have different structures and, therefore, be divided into sub-categories. Let’s go a little deeper into the question now.

Characteristics of the Starter Battery

The starter battery is also not used as a service battery because it would not work at its best. Inside we find an acid, the electrolyte, which allows the exchange of current between the two poles.

If the electrolyte level were to drop, over time, it would cause a deformation of the battery itself, a breakdown of the internal structure and, therefore, the spillage of the acid, which is extremely toxic.

That’s why you must never install it inside the vehicle: it could be dangerous for your health and your loved ones.

Its real efficiency is about 70% of the manufacturer’s claims, and its charging current is typically low (it will charge very slowly).

If the main downside is its potential danger, the strong point is its extremely low price: it typically costs around $150, and you can buy it almost anywhere.

There are typically three service batteries currently mounted on campers (and we say “currently” because research goes on, and luckily new and innovative solutions are found).

The AGM RV battery has a liquid inside it, like the starter battery. Still, it is much safer because the acid is contained in an additional fibreglass box, thus making it impossible to spill.

For this reason, we can also position it at an angle, but keep in mind that, in this case, it will not perform at its best.

Its real efficiency is approximately 80% of what the manufacturer declared.

Let’s say we have mounted a 3000w power inverter on our camper, which can produce an output current of at least 150 A: with an AGM battery, the energy production will drop to about 40-50 A.

The charging current (and consequently the charging speed) for this type of battery is low to prevent the structure from being damaged, giving rise to all the problems we have seen.

An AGM battery is very good for money: it lasts longer than a starter battery, but the price is slightly higher. But, it is really heavy.

The gel battery does not have acid as an electrolyte but rather a gel.

This makes the battery less sensitive to the vibrations typical of a vehicle such as a camper, there is no risk of a liquid spill (because it does not contain liquids), and it can be safely tilted. 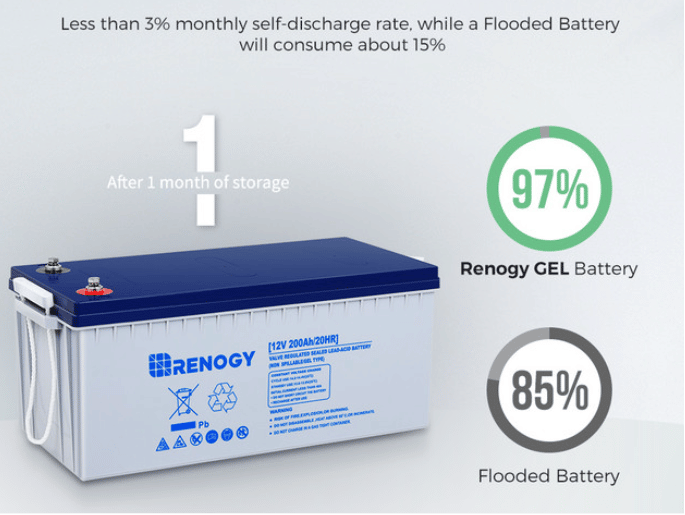 As already seen for the previous battery, also, in this case, a mounted inverter will see a drastic reduction of the output current produced.

This type is also very heavy (indeed, it is the heaviest of all), and the price is slightly higher than that of the AGM: it calculates a cost of $300 – $400.

Its effective efficiency is about 90% of the factory’s claims, and the charging current is low.

The lithium RV battery is certainly the most talked about at the moment. You do not have to fear its danger because, after all, the battery that powers your mobile phone is also lithium; therefore, you keep it constantly in your pocket or close to your ear.

Is it at zero risk? This is not like not battery operated, but it is certainly not as dangerous as some paint it. 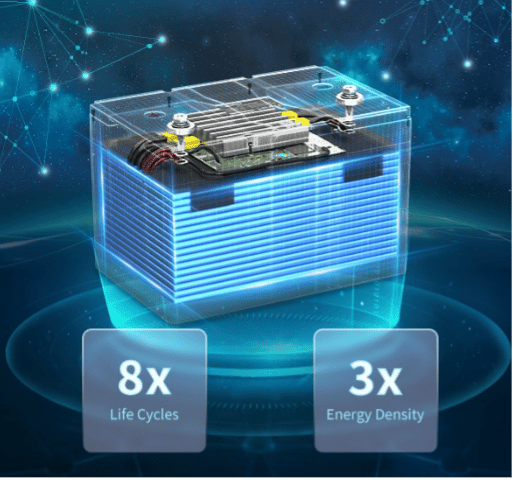 Also, inside, it must have a control unit to block the current supply in case of need. One of its biggest advantages is its weight: while a gel battery can weigh as much as 30 kg, a lithium battery weighs only 10.

And you know how important weight management is on board a camper. It also has an efficiency much higher than the other types: as much as 98%. With a 1500 W inverter, in this case, the output current will be at least 100 A constant, with a maximum peak of 350 A.

It can handle a high charge current and can be recharged quickly. Pay attention only to what is reported by the voltmeter. The instrument on the camper tells us how charged our batteries are.

In fact, while for the other types we will have a more or less truthful indication of their actual charge, for lithium batteries the value will always be that of the maximum charge.

Does this mean that the lithium battery is eternal?

It just indicates its discharge over time once it is completely grounded. The problem can be solved by mounting a shunt, a device through which all the current in and out of the battery passes, thus giving us a true reading of the actual charge.

The biggest cons of the lithium battery are its price, which can easily exceed $1000, but its lifespan is at least 7 – 8 years.

How to choose a professional RV lithium iron phosphate battery?

Presently, there are three primary sorts of lithium iron phosphate batteries for RV. The battery is much lighter in weight and volume than the other 2, which is always better for long-distance travel. The other two batteries are comparable, but when making large-capacity single batteries, the square lightweight aluminium instance transcends to the round steel case, and the soft situation is much better.

Let’s take a look at just how much electrical power a recreational vehicle consumes in a day:

1. The power of a 21-inch television has to do with 50 watts. It is anticipated to be utilized for 10 hrs daily, and the cumulative power consumption is 500 watts, about 0.5 kWh!

4. A rice cooker of 800 watts, with a quantity of 4L, is expected to be used twice a day for half an hour, and the cumulative power consumption is 400 watts, about 0.4 kWh.

5. The 900-watt electric pressure cooker is anticipated to be utilized twice a day for half an hr, with an advancing power usage of 450 watts, about 0.45 kWh.

6. An 800-watt electrical hot water container with a quantity of 4 litres is anticipated to be utilized 3 times a day for 5 mins each time, with a collective power intake of 200 watts, concerning 0.2 kWh.

8. The 500-watt resistance wire electric heating furnace (induction stove is not suggested, as the power and power consumption are high) is expected to be utilized twice a day for 20 mins each time, as well as the cumulative power consumption is 350 watts, concerning 0.35 degrees.

9. Determined according to an equine’s air conditioning unit, it has to do with 1000 watts for an hour, so if it is switched on for 5 hrs, it will eat 5 kWh of electrical energy.

When buying LiFePO4 batteries, every person should be vigilant regarding whether the battery cells acquired are echelon cells. The price or quotation of such batteries is normally half or less than that of brand-new batteries. The battery does not feel much at the beginning of use, yet it is more likely to have a faster capability degeneration after a brief period. That is, the battery use time is reduced.