by Pete Myers 9 years ago4 months ago

An internet troll taunted rapper Wale in to a brief confrontation during a WWE Raw event in Washington D.C.

Although I feel part of my soul depart when writing on Twitter beef, here is what we know about what happened Monday night at the Verizon Center:

Meet Twitter user @Chefboyrnach, here pictured with his friend Wale in the background. 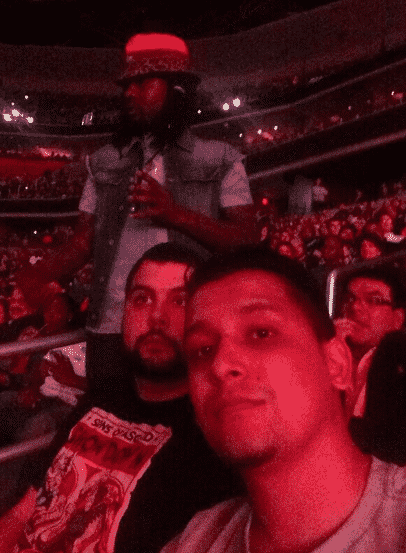 @Chefboyrnach is from North Virginia and a fan of professional wrestling. Many of his tweets incorporate the phrase “breh” a word he seems to use interchangeably with “bro” or “brother”.

“Slide Show Joe” was out on the town for WWE Raw Monday night when he noticed the famous rapper and fellow wrestling fan Wale sitting a few rows behind.

After snapping the above selfie @Chefboyrnach began cyber-bullying Wale with a series of subsequently deleted tweets:

“Did wale just walk by me!? Nahhh b he better come collect this fade”

“You at Monday night raw fuckboy? Come see me in the ring and catch this stunner @wale”

If I’m not mistaken that’s a direct threat of physical violence. That’s if my urban dictionary definition of “catch this stunner” remains unchanged.

After a few more taunts, Wale confronted his trolling Twitter follower in a brief shoving match. The encounter was uploaded in YouTube glory to much praise from the rap blogging community.

Reports from D.C. were initially erroneous. Wale was first said to have punched the troll before video of the incident emerged proving otherwise.

@Chefboyrnach has faded back to Twitter obscurity, his bio fitting of the troll genome.