Bill Clinton is relatively new to the Twitter game. He joined the social network a few months ago after being pushed by Stephen Colbert and it’s taken him a little bit to fall into a nice social groove. Clinton may have hit his stride this week, however, when he took a page out of his wife Hillary Clinton’s book of memes.

The Texts from Hillary meme went viral a few years ago after a photo of Hillary Clinton started spreading around the internet. The photo showed the former Secretary of State sitting behind a stack of papers while calmly texting aboard a military plane. Texts from Bill uses the same scenario, but the former president is using an over-sized tablet to send out his messages.

In addition to posting the photo, the former president also used the meme as his Twitter background. Bill Clinton also added a little tongue in cheek phrase to his bio. Yes, Bill Clinton is the first person in the history of the world to have President of the United States and “meme appropriator” on his resume. 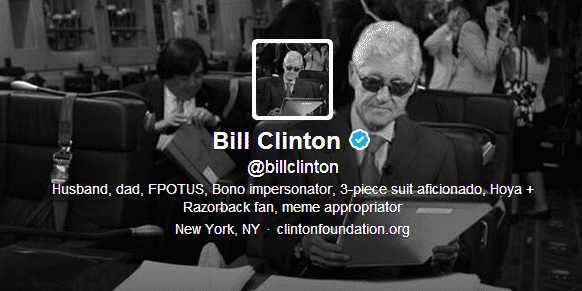 This isn’t the first time that Bill Clinton has hopped on a hot Twitter trend. The former president sent out his own group selfie photo last month mimicking Ellen Degeneres’ famous Oscar selfie.