Woman Brags About Passing Breathalyzer On Facebook, Which Violates Her...

by Dusten Carlson 9 years ago9 months ago

From the “be careful what you post on social media” file, a woman bragged about passing a breathalyzer test in a status update on Facebook despite the fact that she drank the night before, inadvertently confessing to violating her probation for a previous DUI.

Colleen Cudney, 22, was called in the day after St. Patrick’s Day for a random breathalyzer test, a requirement of her probation from a 2012 drunken driving conviction. 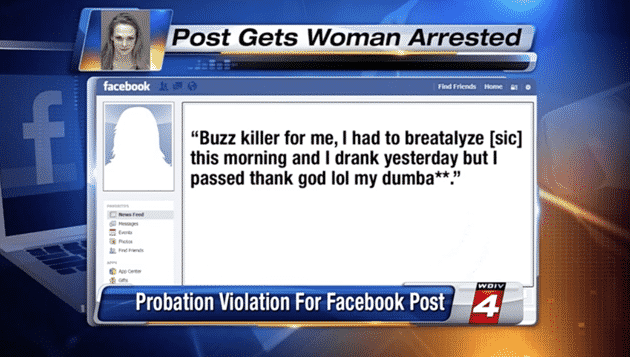 A police officer spotted the post, and told Cudney’s probation officer. When the office called Cudney for a follow-up urine test (which would have shown whether she had indulged during the previous 80 hours), she hung up.

Most observers had the usual remarks about Cudney’s ill-advised Facebook update, but the most succint came from Thomas Boyce of Inkster.

“People post some crazy things. They don’t even think before they do anything,” he said.

Hanging up on her P.O. was another violation of her probation, and one she will answer for in court on April 1. If convicted, she could be sentenced to 93 days in jail for violating probation which, again, was just a few weeks shy of being over.

Usually someone has to threaten the president on social media to land themselves in jail, but a number of cases similar to Cudney’s have popped up in recent months. In January of last year, 18-year-old Jacob Cox-Brown was arrested and charged with two counts of failing to perform the duties of a driver after posting the following status update: “Drivin drunk … classsic 😉 but to whoever’s vehicle i hit i am sorry. :P”