A frustrated parent posted his response on Facebook to the “ridiculous” common core math homework his elementary-school age son brought home, and now it’s making the rounds on social and media outlets.

Jeff Severt posted a copy of the common core math homework worksheet on Facebook. The document, bearing his handwritten comments, had a rather elaborate formula. In lieu of solving with a simple strategy of subtracting the smaller number from the larger one to achieve the answer, the common core math problem asked “Jack to use the number line below to solve 427-316. Find his error. Then write a letter to Jack telling him what he did right, and what he should do to fix his mistake.”

This was Mr. Severt’s clever reply: 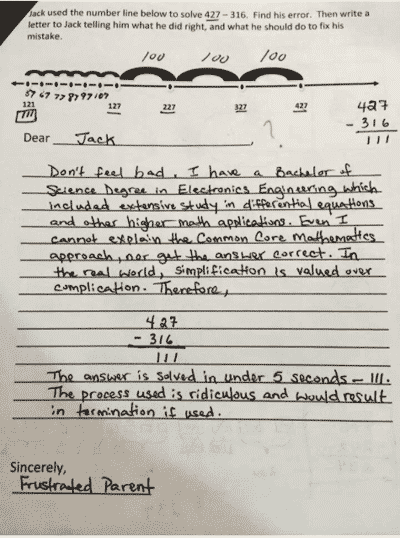 In case you have an issue reading it, Severt states, “Dear Jack, Don’t feel bad. I have a Bachelor of Science Degree in Electronics Engineering, which included extensive study in differential equations and other higher math applications. Even I cannot explain the Common Core mathematics approach, nor get the answer correct. In the real world, simplification is valued over complication. Therefore, 427 – 316 = 111. The answer is solved in under 5 seconds — 111. The process used is ridiculous and would result in termination if used. Sincerely, Frustrated Parent.”

The Facebook post generated numerous likes and shares, with many grown adults replying with anti-math retorts like, “Well, I HATE math and while I get the first few loops I seriously don’t get the rest of it.”

According to Yahoo, Indiana was among 45 states that in recent years adopted Common Core standards defining what students should be learning in math and reading at each grade level. But many have criticized the efficacy and usefulness of the learning model.

While the program aims to ensure that all children are equally prepared as they advance to the next level by dictating what exactly students in kindergarten through 12th grade should know in arts, language, and math by the time they complete each grade – the well-intentioned model comes off more like a “one size fits all” learning tool, which is difficult to utilize with absolute success.

For example, for children with learning disabilities or conditions like ADHD this learning mode can be especially frustrating.

Megan Charles is a general news and health-focus writer with a background in medicine and biotechnology. Currently she is contributing to Social News Daily and Whole Woman Health. Former credits include Indyposted, The Daily Globe, and The Inquisitr.