Neil Patrick Harris And Jason Segel Sing ‘Confrontation’ On ‘Inside...

by Kevin Park 9 years ago10 months ago

“How I Met Your Mother” actors, Neil Patrick Harris and Jason Segel, performed a rendition of “Confrontation” from “Les Miserables” when an audience member asked them to on an episode of “Inside The Actors Studio”.

The amazing performance received a standing ovation from the audience.

“You haven’t sung that in a long time!”

That was a reference to when the two had first performed the number on the Megan Mullaly Show back in 2006. The actors quickly remembered their respective roles and belted out the lyrics with a certain amount of conviction that had not been present the first time around.

As “How I Met Your Mother” ends with the last episode of season 9 this week, the cast and crew have not been shy about sharing their emotions about the big finale.

Craig Thomas, the co creator of the T.V. show, posted on Twitter saying:

Alyson Hannigan also tweeted a picture from the last “How I Met Your Mother” table read featuring a huge mess of wadded up tissues. 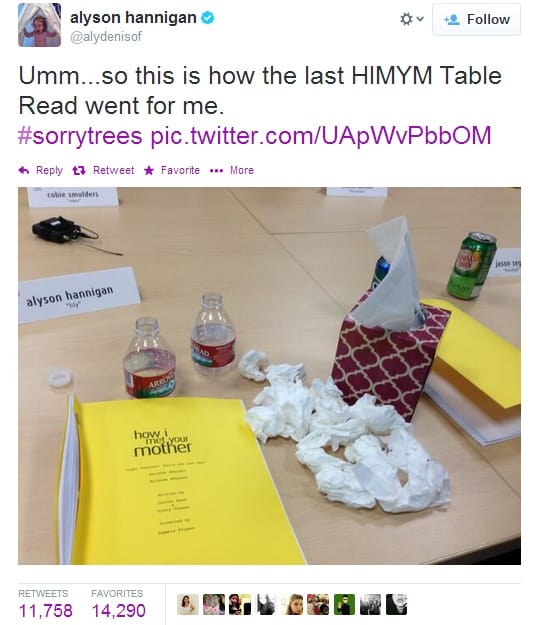 The show’s finale episode is set to air this Monday at 8 p.m on CBS.