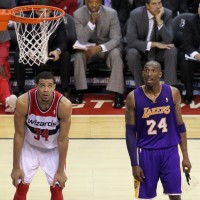 JaVale McGee, center for the Denver Nuggets, has posted a video of himself riding an electric shopping cart on his personal Instagram (@javalemcgee_34).

The video included an edited version of the song “Boyz-n-the-Hood” by Eazy-E and a caption that read:

The post has amassed over 1,580 likes and currently has 117 comments. After seeing the video, many of his followers on the social platform are talking about the leg injury that McGee had received about three months ago.

According to USA Today, the Nuggets had announced on February 20th, that McGee would have to sit out from the rest of the season after having received a stress fracture in his left leg about three months prior, in November.

In total, he has played five games this season, and averaged 7.0 points and 3.4 rebounds a game. As for his entire career, McGee has averaged 8.7 points, 5.7 rebounds, and 1.9 blocks a game in the six seasons he has played with the Washington Wizards and Nuggets. He was also expected to start this season for the Nuggets, the team who had picked him up in a trade in 2012.

“While it’s disappointing that we won’t have JaVale back on the court this season, we’re happy that he can move forward in his recovery.”