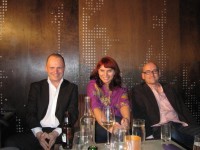 The team at Social News Daily is excited to announce that new media superstar Duncan Riley is joining our network.

A close friend of ours and long-time collaborator, Duncan is a pioneer in the social media realm. During the early days of web reporting and blogging, Riley was instrumental in the founding of numerous popular and well-known sites, including The Blog Herald, b5media, and Inquisitr.

In 2005, Duncan helped launch b5media, a company which would eventually attract $14 million in venture capital funding. B5Media is now part of the Crushable network.

Following his stint on at b5media, Duncan spent 12 months as a writer at the seminal tech reporting site TechCrunch. During his TechCrunch tenure, Duncan was afforded the opportunity to interview major figures in technology at the crest of the new media boom.

Riley, a native Australian, became known at TechCrunch for his strong and unapologetic opinions, unfettered honesty, and his unique brand of straight-shooting in his content. In a vertical populated with milquetoast write-ups and mild feedback, you could always look to his assessments for a no holds barred and truthful take.

Duncan left TechCrunch to launch Inquisitr, where he remained until 2011. Following its sale, Riley remained a strong presence on the social media scene, active on social sites such as Twitter as he traveled and explored varied new media ventures.

It goes without saying that finally having the chance to work with Duncan at Social News Daily is one of our most exciting developments to date. His unparalleled experience in an industry that’s still very new is a major boon for our network, and we’re well-acquainted with all he brings to the table as a longstanding technology and social media voice.