Is it time to #CancelColbert? No, no it’s not. But it may time to fire an intern.

Stephen Colbert found himself in hot water today after sending out a tweet that many people deemed racist. But here’s the thing: Stephen Colbert doesn’t actually run the official Colbert Report twitter account.

In fact. @StephenAtHome was furious at Stephen Colbert for being an insensitive jerk.

#CancelColbert – I agree! Just saw @ColbertReport tweet. I share your rage.
Who is that, though? I'm @StephenAtHome https://t.co/e0Pqz7U7i9

The controversy started earlier tonight when @ColbertReport sent out a message that read: “I am willing to show #Asian community I care by introducing the Ching-Chong Ding-Dong Foundation for Sensitivity to Orientals or Whatever.” 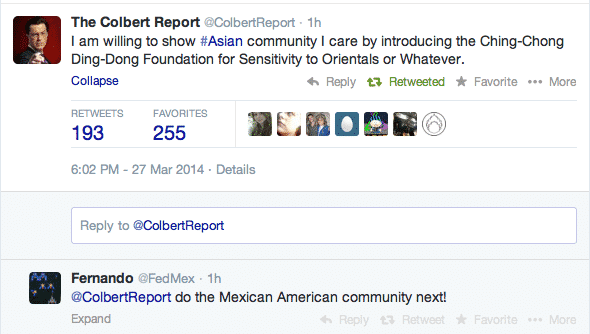 The tweet was referencing a skit on The Colbert Report where Stephen mocked Redskins owner Dan Snyder for his attempt to patch things up with the Native American community. The joke worked on the show but on Twitter, out of context, in 144 characters or less, well, people thought that it was a little over the line.

The #CancelColbert hashtag started trending as several people took to the internet to call for an apology from Colbert. An apology hasn’t come yet but Comedy Central / Stephen Colbert have tried to clear up any confusion.