A new social app seems to launch just about every single day, but a new app called Split is an anti-social/ingenious app that definitely grabbed our attention.

Unlike apps such as Highlight which helps you connect with people nearby, Split utilizes a similar concept, but helps you avoid people in real life.

Instead of requiring your friends and followers to also be using the app in order to see them nearby, it keeps an eye on your Facebook, Twitter, Foursquare and Instagram feed.

After connecting your social media accounts, you’re asked to select people you want to avoid.

Thanks to being able to tag status updates or photos with a location, Split can detect that and if an “undesirable” is found nearby, can give you a heads up.

It can even let you know when someone you want to avoid joins an event you’re attending, and you can also scan locations before heading out.

Here’s how Udi Dagan, CEO and Founder of Split, came up with the idea:

“The idea for Split was born on a frustrating night, about two years ago, when I ran into my ex-girlfriend in a bar. After a few awkward minutes, I hurriedly gathered my friends out of there and into another pub down the street, where I literally bumped into another ex… Not a good night.”

Split is available for iOS and Android, and has received $1 million in funding from multiple investors, including entrepreneur Christopher Burch and Warner Music Group Director Jorg Mohaupt. 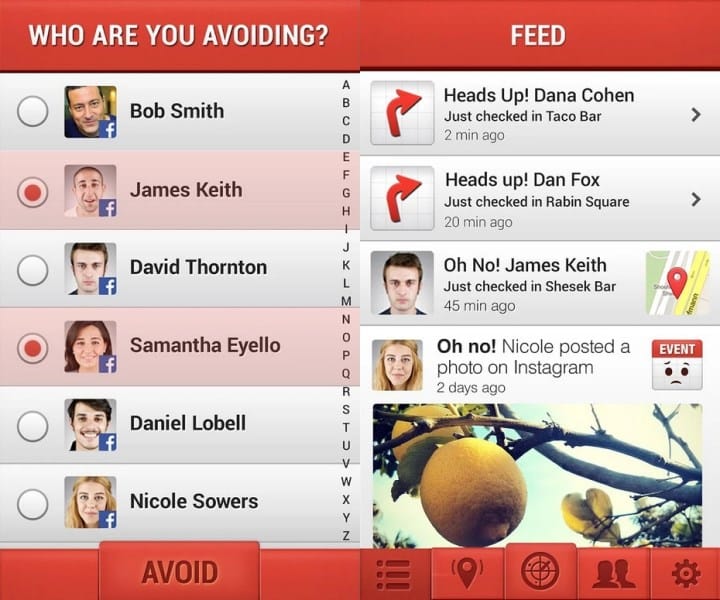