Grant Hill had a nice NBA career. While he never quite reached the lofty heights set by the extreme level of hype he generated after being a key part of the Duke Blue Devils’ two NCAA championships (and a third appearance in the title game). While on the court Hill was undoubtedly a beast, his career was often plagued by injuries and he was seen as never reaching his true, Jordan-esque potential.

Hill injured his ankle late in the 1999/2000 season, his last in Detroit, before being the main player in a sign and trade deal with Orlando. Hill received a huge seven year contract worth $96 million as Orlando envisioned a powerful one-two punch with him and Tracy McGrady. That never materialized as Hill was injured so often, that he only played 47 games over his first four seasons with Orlando (for reference, there are 82 regular-season games a year in the NBA).

You could blame Orlando for giving such a large contract to a player who had just suffered a major injury, but sports fans aren’t known for being the most reasonable bunch. This less than bright period in Orlando Magic history caused one fan to turn into an Instagram Troll when he saw Hill filling up on gas while on his way to be honored by the Orlando Magic.

User “jungdaddy” took this image of Hill kindly holding a door open for woman while posting a rather insulting comment. 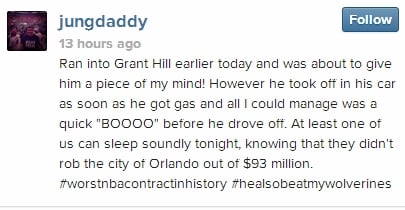 Hill, apparently must of remembered hearing the “BOOOO” because he immediately shot back, making jungdaddy look like a little babby.

jungdaddy shot back with a response that basically boils down to “well, you are famous and I got you to respond to me, so there!” 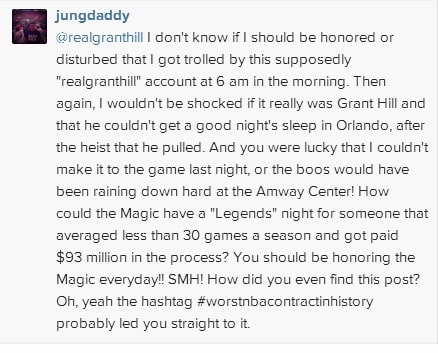 While it is a little strange that Hill was browsing Instagram at 6am, jungdaddy’s comment doesn’t erase the face that Hill made him look foolish with the “It’s easy to have courage on Instagram” comment. It seems like jungdaddy should have had plenty of time to tell Hill what he wanted to his face, considering he had time to take a picture, but instead he decided to throw peanuts from the internet gallery.

Also, when trying to attack a public figure online, it’s probably not a good idea to take a picture of him doing something kind and “normal” like holding a door open for a lady.

As for being honored in Orlando? I’m not sure how Magic fans should feel about Hill, but the crowd reaction when he was honored was reportedly a positive one. He also recently got the call to the College Basketball Hall of Fame, which should help him feel better.