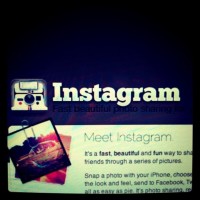 The popular social networking site, Instagram, has reached a new milestone. Instagram has reported via their blog, that they currently have 200 million active users.

These users even include celebrities such as Justin Bieber who post pictures of himself modeling underwear.

And although many projects and communities can get a lot of participants at first, it is hard to maintain that number and continue to grow as rapidly as Instagram has.

The social networking site has also noted that more than 20 billion photos have been shared and posted onto it’s platform. Everything, ranging from pictures of one’s dinner to his or her best friends dance recital has been posted onto the platform and there are no signs of it slowing down.

The site has been growing incredibly, with an astonishing 50 million new Instagrammers having signed up in the last six months alone.