Michele Bachmann Agrees With Fred Phelps? Not So Fast …...

Rep. Michele Bachmann (R – MN) doesn’t exactly agree with late Westboro Baptist Church founder Fred Phelps, except she totally farkin’ agrees with him about everything, at least according to this thing you read on Facebook: 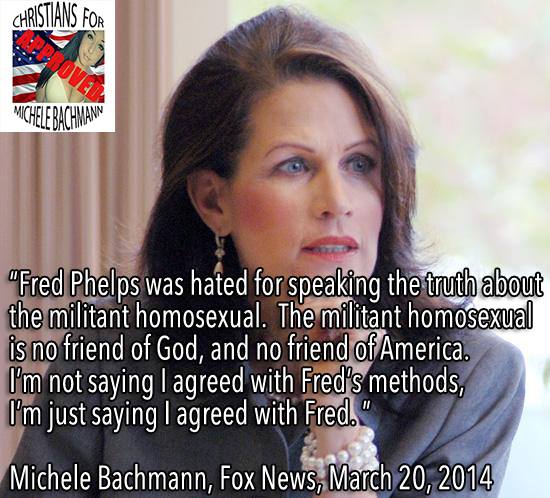 The post has gone semi-viral on Facebook this week, and though many spotted the macro for what it is (a hoax), more than a happy few were fooled, shared, and freaked out all of their LGBT pals.

While it may be true that Bachmann, a conservative firebrand and self-appointed defender of “traditional marriage,” may quietly hold some of the same prejudices so vehemently espoused by the Phelps family and their Westboro Baptist Church hyenas, the meme above is a complete fabrication.

Search the Internet far and wide, you won’t find a single video from Fox News of Bachmann saying those words. Furthermore, if it had actually happened, groups like Media Matters and Right Wing Watch would have hardly missed the opportunity to make sure you know about it. The video would have been viral for several news cycles, you would have seen it for yourself instead of reading about it on a meme.

On that note, if you search Google News results for a combination of “Michele Bachmann” an “Fred Phelps,” nothing applicable comes up except for a piece by Ismay on the Daily Kos, which seems to refute my above point and lend credibility to the meme.

However, the piece does not include a video, and Ismay doesn’t appear to have done any fact-checking whatsoever. Then again, things primarily exist on Daily Kos because rage and confirmation bias.

Our last piece of evidence is the Facebook page the meme originated from itself. Unmistakably watermarked in the photo, if you can’t tell that “Christians for Michele Bachmann” is satirical in nature, then you deserve a slap on the wrist.

“Michele Bachmann Agrees With Fred Phelps? Not So Fast …” is part of SocialNewsDaily’s “Hoaxed” series which debunks viral social media hoaxes. Hit the share buttons on the left, or check out more from the series in the “Social Communities” tab up top.