Twitter Users Are Highly Engaged With Tweets About Their Favorite...

Twitter has become a major source of “second screen” engagement for TV show producers. In fact, some lower rated shows, such as Community, have only managed to stay on-air because of their highly engaged Twitter demographics.

A new study by Twitter, Fox and industry-backed group the Advertiser Research Foundation, showcases the importance of Twitter.

According to the study, tweets are more likely to resonate with TV viewers if they arrive directly from an actor on the show or another cast member (40%). In comparison, a tweet is only engaged with 26% of the time when it comes from a user’s friends or family members. 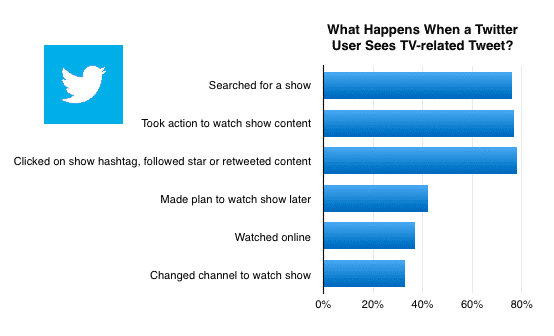 Twitter is even able to create new show viewers or lead to a “return” to that show if someone has stopped watching.

The biggest hit among Twitter users? The study found that ABC’s Scandal is huge among followers. Scandal’s cast members are known for live-tweeting the show with fans as it airs.

The Advertising Research Foundation notes in the study that advertisers are more likely to get a bigger bang for their buck thanks to Twitter. Fans who are more invested in their favorite show tend to pay more attention to commercials aired on that series. The study finds that people who engaged on Twitter are 16% more inclined to like and buy brands that advertise on the show. That findings was based specifically on interactions among American Idol fans.