Box CEO Aaron Levie on Tuesday announced Facebook ‘Like’ integration for its cloud services. The ‘like’ button is now available for all uploaded files alongside the company’s collaborative editing feature.

In a Box blog post the company’s officials wrote that the ‘Like’ button placement is “the easiest way to note approval or just tell a coworker you like the work they’ve done.”

Collaborative testing at Box arrives after a successful beta test of the new offering. Using collaborative testing users can edit files directly from the Box preview page. Users choose editing programs that are installed on their machines to edit the documents.

Users can also create Excel and PowerPoint files without needing to leave the Box service. The program also allows for file locking so simultaneous editing does not conflict with changes from one user to another.

Box customers will see the cloud storage services new features roll out over the next several weeks. 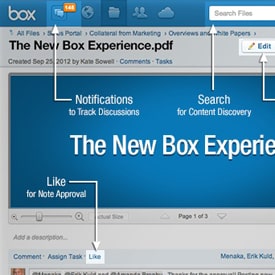