by James Kosur 11 years ago2 months ago

Namco Bandai, the company behind the hugely successful arcade game Pac Man has released their popular game in the form of a Facebook app. Actually it gets better, users can play the original or download Pac Man S (Social).

In the original game users play the standard version of Pac Man, attempting to gobble up all of the little yellow dots (Pac-dots) on the screen while avoiding ghosts and eating fruits. Once a user loses their three lives they are able to purchase more lives using Facebook Credits. Currently each game costs 1 Facebook credit ($.10) to play with a minimum of 10 credits per purchase (although Bandai is offering the option to load just 3 Facebook credits upon initial launch).

Here’s a look at the original layout which is controlled with your keypad arrows: 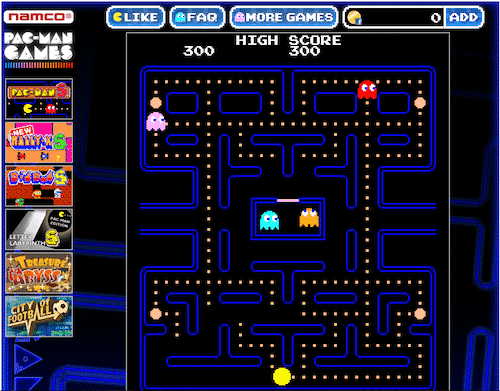 On the flip side there’s Pac Man S, a social version of the game that allows users to play against friends. Unlike the original game the board starts with just several yellow dots which users must hunt down and eat alongside fruits. Once all of the pieces have been collected new yellow dots appear on the board and this process repeats itself for two minutes. Users receive the social element by comparing their scores to the scores of their friends.

Here’s a look at the starting Pac-dots setup for Pac Man S: 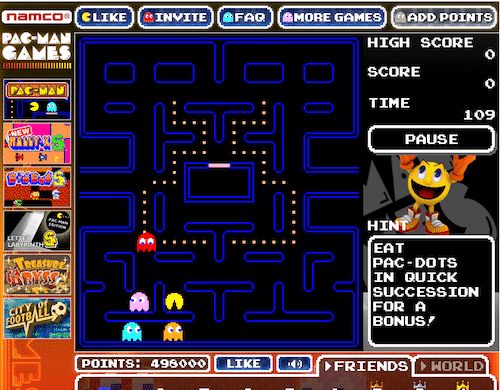 As you can see from the “Hint” screen, the faster you eat the Pac-dots (yellow dots) the higher your score which adds an additional element to the competition.

On both games you can see how you fair against friends by look at the “Friends” tab and how you rank worldwide use the “World tab” here’s a look at the scorecard output:

I’m a huge fan of the original Pac Man arcade game but I’m not sure if I would be willing to pay $.10 for a game I can readily find available for free online, this one will really come down to how competitive each player wants to be.

Once last quick tip, if you log out of the game after your first three Pac Man deaths and log back in you will likely see a “Like” screen which will give you a free credit for “Liking” the game. 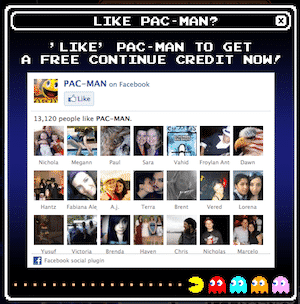