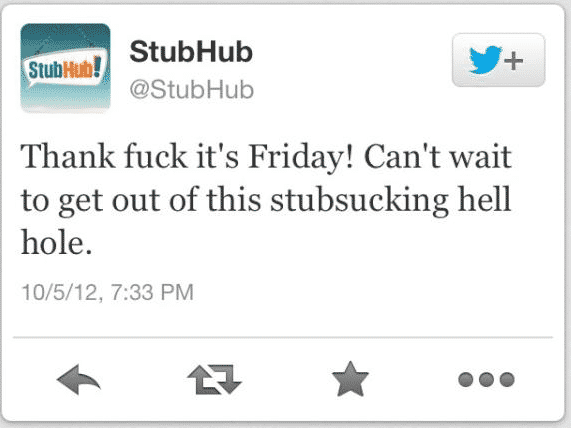 The tweet appears to have been posted by a StubHub employee who was likely attempting to post a message on their own account or by a hacker trying to have some “fun” with the account.

The message which is shown above uses the words “stubsucking hell hole” to describe work at the large scale ticket scalping company.

Originally sent at 7:33 p.m. Eastern Time the tweet was deleted at 8:20 p.m. at which time the @StubHub account posted the following apology:

We’ve deleted an unauthorized tweet made from this Twitter handle. We apologize to all of our followers for the inappropriate language used.

StubHub’s PR team says they are currently “investigating the origins of this tweet.”

The StubHub message follows an insensitive tweet by the @KitchenAid account earlier in the week, that message aimed at President Obama’s dead grandmother was later found to have been posted accidentally by a Kitchen Aid employee.