A patron of the library recently posted a Twitter picture from the library and he was quickly met with threats of legal action.

News reporter John Gapper was visiting the library when he went out the following tweet: 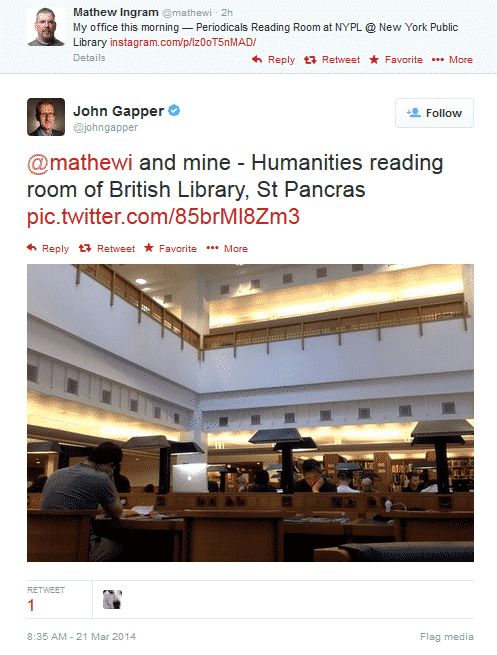 Almost immediately after Gapper sent out his tweet the library demand its removal. According to officials, the photo violated copyright laws because the patrons in the photo didn’t give permission for the image to be taken.

The library’s officials, or at least whoever handles the buildings Twitter account sent out a bunch of nonsensical notes about the tweet, and photo, and copyright laws.

When fellow reporter Mathew Ingram asked if the library was serious they wrote “yes” and when he asked why they oddly tweeted “all the more reason for not taking photos then!”

We could harp on the lack of written context from a library official, but instead we will choose to share a few more messages from the library account: “For collection items: copyright issues; for readers: they haven’t given their permission to be photographed.”

What follows was a fellow mews person sticking up for another reporter:

@BL_Ref_Services @jeffjarvis @johngapper: the first two of those are rather absurd, and isn’t the third covered by it being a public place?

@BL_Ref_Services @jeffjarvis @johngapper: The idea that someone would take enough photos of copyrighted works to make it an issue is absurd

@johngapper @BL_Ref_Services @jeffjarvis: I assume Twitter is banned as well — what if you tweeted a copyrighted book? Chaos

So was Gapper violating copyright laws in a public building? We highly doubt it. Perhaps the library official was just really bad at explaining the libraries policies for patron privacy.

In any case, we highly doubt that the library photo will be deleted from Twitter and if I was Gapper I would fight as hard as possible to protect my rights.