AirBnB has connected millions of users to short term rental properties all over the world. Now the company is aiming for a $10 billion valuation. According to inside sources the company hopes to raise $400 million to $500 million in a new round of funding.

A source at The Wall Street Journal says “people familiar with the process” are claiming that private equity firm TPG is leading the round.

Putting that number into perspective, AirBnB would be valued higher than Hyatt Hotels and Wyndham Worldwide. A fitting valuation for a company that has largely disrupted the travel sector with its low cost and accessible fees.

AirBnB has come a long way since its debut in 2008. The company now has more than 600,000 listings worldwide, connecting users to single room, whole house, and even “couch” rentals. AirBnb collects a fee for each booking made through its website. For example, my last stay with AirBnB yieled a $79 fee for the company based on a 5-night stay priced at $650.

AirBnB insures each participants property up to $1 million, offering a valuable incentive for anyone willing to join the service. You can read about the company’s insurance policy inside of its Trust Safety Center.

Much like a regular hotel listing, participants list various amenities including internet service, washer/dryer service, and more. The company even offers sections for unique rentals such as Treehouse Homes: 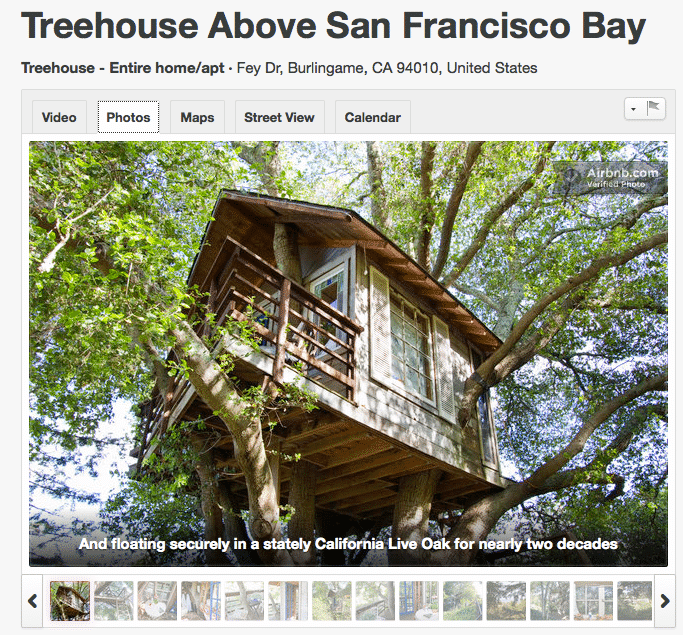 As a huge fan of the AirBnB service I can easily understand how a $10 billion valuation can be placed on such a novel idea.

AirBnB has not comment on speculation about its new funding round.