New Messaging App ‘Sneeky’ Is A Combination Of Snapchat and...

by Kevin Park 9 years ago8 months ago

A new application called “Sneeky” has been released on the iOS platform by Sneeky Inc. This application is aimed to be popular specifically around teenagers and can be seen as a combination of two well known applications, Snapchat and Secret.

Similar to Secret, Sneeky only allows the phone numbers on the user’s contact list see the messages posted. However, they will not know who sent them. Also, like Snapchat, Sneeky allows its users to send private pictures to their friends. 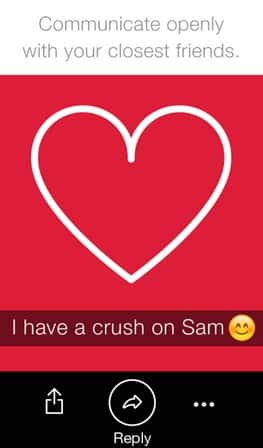 Sneeky Inc did however make sure to implement many privacy settings within the application. For one, users are able to change their settings so that they only receive “sneeks” from people in their phone’s contacts list. They are also planning on implementing a blocking feature in the next update where the user can block a user based on a photo.

One of the app’s founders, and Draw Something designer Garett Peek, told TechCrunch that Sneeky wants to specifically capture the 16 to 24-year-old crowd.

“They are on mobile, and are concerned about their public reputation,” he said. “Sneeky gives them a way to interact privately with their friends in an uninhibited way.”

Since the app is fairly new, not many people have begun to use this new, private messaging app. However, initial reviews are looking good and this app could potentially become the next big thing for teens.