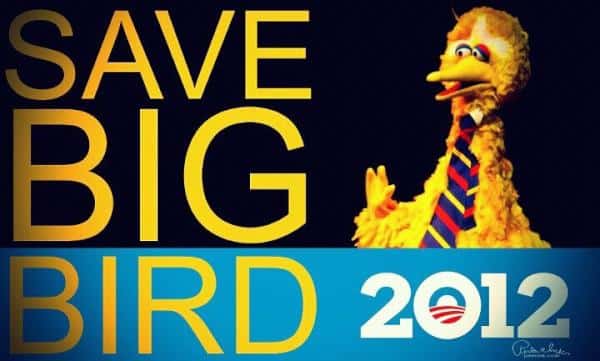 The presidential debate last night has already spawned an influx of memes, but the best of them concern the Sesame Street character Big Bird after GOP hopeful Mitt Romney hinted that his alphabet reciting days may soon be over if he takes the presidency.

Though admitting that he loves Big Bird, Romney is dead-set on cutting PBS’s government funding, prompting the internet to rush to the beloved Sesame Street icon with meme tributes, Twitter accounts, and fundraising campaigns.

In a genuine display of quick thinking and marketing cunning, PBS has embraced the deluge of Big Bird memes and the attention afforded the network thanks to the debate. PBS decided to make an ad buy for the phrase “Big Bird” on Twitter, so whenever you search Big Bird on the popular microblog, you’ll see an ad for PBS with a link to valuepbs.org, which reveals how much running the network actually costs taxpayers per year: $1.35.

If you’re a fan of PBS and Sesame Street, you can actually follow or RT either of these posts below within the article:

Big Bird: My bed time is usually 7:45, but I was really tired yesterday and fell asleep at 7! Did I miss anything last night?

PBS is trusted, valued and essential. See why at valuepbs.org. (please retweet!)

The world is devastated by the news that Britain’s Prince Philip, the Duke of Edinburgh, has died at the age of 99. Palace media confirms that the Duke has expired mid-day today, April 9th. The announcement did not contain any specifics on the cause of death. The United Kingdom will enter a state of national… END_OF_DOCUMENT_TOKEN_TO_BE_REPLACED

Who would have known that religious prophets would be among the most loyal supporters of former President Trump? In fact, it has been observed that the most conservative Christians may have been the right amount of push for Trump’s presidential win back in 2016. Since Trump’s election back in 2016, numerous self-proclaimed “prophets” have been… END_OF_DOCUMENT_TOKEN_TO_BE_REPLACED

President Biden falls and slips multiple times on the Airforce One Steps and PEOPLE ARE GOING CRAZY! What’s the big deal? Some people are hating, while others are making memes just for the fun of it. We are all human, aren’t we? Everyone’s expected to stumble some time in their lives. However, with the internet… END_OF_DOCUMENT_TOKEN_TO_BE_REPLACED