How Conspiracy Theories Go Viral On Facebook [With Data, Charts...

We’ve seen a number of hoaxes and conspiracy theories go viral on Facebook, and while most of us might agree that they’re usually pretty ridiculous at face value, they continue to be shared anyway. Why? I’m glad you asked. Fortunately, a bunch of researchers figured it out so we don’t have to.

Per Technology Review, here’s a chart, as promised: 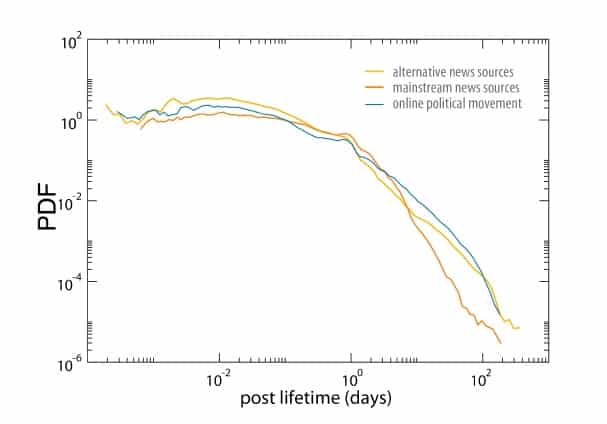 Now, here’s how to make sense of the chart:

Researchers at Northeastern University in Boston used a recent viral post to study how 1 million people treated political information posted to Facebook. The post went viral last year during the Italian elections last year, despite the fact that it contained at lest four false statements and was, on the whole, completely false. Now might also be a good time to mention that it originated from a satire page, as these things usually do.

Anyway, thousands of people shared it, and it picked up even more steam when it was re-posted with additional commentary on a more “respectable” politics page.

Northeastern University researchers, led by Walter Quattrociocchi, looked at how people interacted with these posts when they originated from mainstream news organizations, alternative news sources, or pages that are dedicated to political commentary. They also looked at how people react to false or satirical “news” reports.

Their results showed that while readers engage with content the same way and for the same length of time regardless of the source, some seem to engage extra hard with completely false content.

Additionally, they found that people who predominantly get their news from alternative sources are more likely to be duped by false information. This isn’t a reflection on alternative news so much as a reader’s ability to parse good information.

“Surprisingly, consumers of alternative news, which are the users trying to avoid the mainstream media ‘mass-manipulation’, are the most responsive to the injection of false claims,” the researchers concluded.

TR summarized that conspiracy theories go viral on sites like Facebook when “ordinary satirical commentary or obviously false content somehow jumps the credulity barrier,” adding, “that seems happen through groups of people who deliberately expose themselves to alternative sources of news.”

But it’s probably even simpler than that. A common thread that we see in our hoax-busting endeavors is the validation of confirmation bias. Sure, this is kind of a subjective thing, but anyone can take the temperature of a satirical and/or false post by looking at the comments. In the end, people share things because they get pissed off, and conspiracy theories that go viral on Facebook are usually designed to do just that. As we’ve found countless times, nothing that is inherently bullsh** was designed to fit in on anything but the most superficial level.