Just about every brand has taken advantage of the #PiDay hashtag in someway today. And why wouldn’t they? #PiDay has been trending on Twitter all day which makes it the perfect opportunity for brands to get their message out.

ATT turned their phone into a piece of pie…

Getting kids interested in #STEM should be easy as #Pi. #PiDay https://t.co/fXlKKDenvL pic.twitter.com/IIJEHCWF6L

… Red Bull made a joke about the engineering of energy …

… and Bing. Well, Bing needs to hire someone else to do their social marketing. 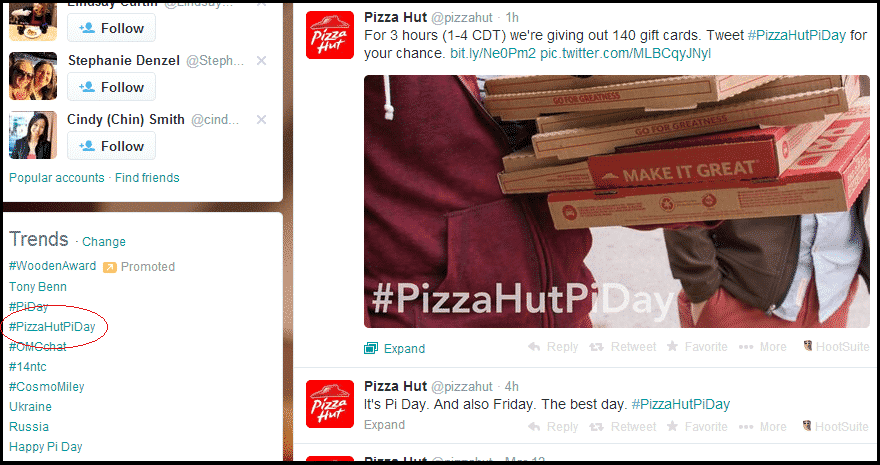 Not only was Pizza Hut able to attract some views to its account by jumping on the #piday bandwagon. They were able to make their own hashtag, PizzahutPiDay, trend on Twitter. Of course, Pizza Hut did have one major advantage: Free pie.

Pizza Hut asked it’s fans to use #pizzaHutPiDay on Twitter for the chance to win a free gift card. Some people might consider that cheating but not us… We like free pizza. (Hint hint.)

Pizza Hut may have had an advantage over companies like Red Bull, ATT, and Bing (poor, poor Bing) but it wasn’t the only pizza company to try to take advantage of the hashtag.