Anyway, back to the bear penis, which accidentally (we suspect that’s Eat24 code-talk for “completely on purpose”) makes a cameo in one of eight TV spots from the company’s latest ad campaign. After debuting to positive feedback on YouTube, the company shipped the ads off to the networks, where bear penis ad was rejected by a puritanical D.C. sales rep: 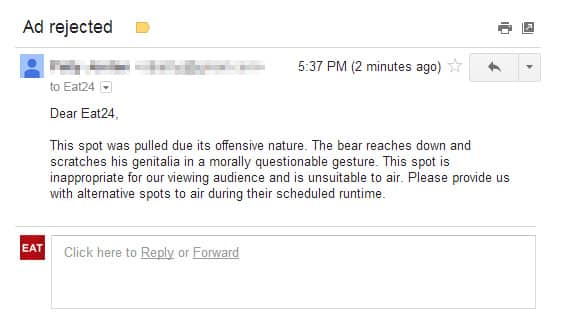 This is speculation, but we’re pretty sure that at least three people at Eat24 corporate gasm’d at the phrase “morally questionable.”

Long story short (you can read the full account at Eat24’s blog), nobody important was offended because bear penis is pretty victimless lulz. The ad went on to be a major success for Eat24, and just to cover their bases, they issued an apology for the bear’s indecency.

Most were amenable to the apology.

You can support Eat24’s shenanigans by following them on Twitter.