Wooga has watched as their monthly active users base has from from 18 million users in March to more than 29 million units during the month of May. The company which focuses on “mass appeal” titles already controls Monster World, Diamond Dash and Bubble Island.

While many social gaming company’s have chosen to go after “niche” markets, Wooga has moved in various directions, choosing to mass market some of their titles while also offering “niche” titles that offer less appeal but offer higher average revenue per users (ARPU) thanks to their longer average daily playtimes that can often surpass 30 minutes to several hours of gameplay per day as opposed to some mass market appeal games such as Zynga’s “Ville” products (CityVille, FarmVille, GagaVille) which average in the vicinity of 10 minutes per play each day.

The move towards the niche market and mass appeal titles is a smart move for the company, Kabam, a niche gaming company recently raised $85M in 4th round funding for their niche products despite a far lower 7.2 million monthly active users.

Fergal Mullen of Highland Capital Partners explained why his company led the way through series B funding:

“We are enthusiastic about the vision that Jens and his team have of the future of social gaming, and their record in executing that vision to date speaks for itself. wooga is witnessing explosive growth in active, loyal user figures. It has an excellent working relationship with its Facebook partners, and is best positioned to develop tomorrow’s most popular social games.”

That’s all nice and “PR Friendly” but let’s be honest at least part of the investment is thanks to the company’s increase in monthly active users, here’s a chart to show just how impressive that growth has been over the last several months: 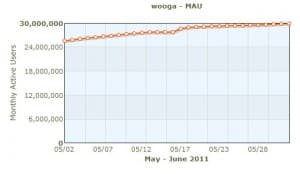 We’ll be keeping an eye on Wooga as they continue to broaden their social apps offerings on both the mass and niche markets.