‘Girl Killed Herself Live On Cam’ Is Back On Facebook,...

If you saw a post on Facebook this morning titled “Girl Killed Herself Live on Cam” and thought, “gee, that looks familiar,” there’s a reason for it. Not only is it a blatant bait-and-switch social scam, but this is its fifth consecutive year of duping users for clicks.

Spotted by Sophos’ Naked Security blog, the “Girl Killed Herself Live on Cam” usually pops up on a friend’s timeline, but when you click on it, it doesn’t bring you to a video. Instead, you’re re-routed to a page that begs for your “like” in order to finally see the clip.

If you don’t smell the bullsh** by then, a few minor details on the page itself betray it as a scam page. Usually, the page has been created recently and doesn’t have a whole lot by way of content on it.

If you skip the “like this page” step, you’re still forced to share the video before you’re allowed to actually watch it. 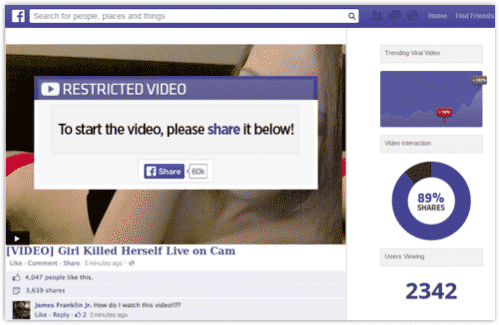 Once you’ve shared, it there is yet another step where you’re asked a number of “security questions” that are really pay-per-click surveys or special offer pages. You’re putting mad money into the scammer’s pocket every time you fill them in.

Adding insult to injury, there’s no video at the end (why did you want to watch a teenage girl kill herself anyway??).

Sophos gave a few tips for spotting and avoiding these scams, and it’s pretty good advice.

The “Girl Killed Herself Live on Cam” hoax has made rounds on social media in some form or another since 2010. Let’s put an end to it once and for all this year, folks.