by Pete Myers 9 years ago8 months ago

Grammy winning R&B artist and convicted batterer Chris Brown has a unique relationship with his Twitter handle. For reasons unknown, Chris Brown is unable to control the impulse to tweet misogynist and homophobic micro blogs, which he immediately regrets and deletes.

The pattern of behavior struck again this week. Chris Brown tweeted a gay slur that society views as condemnable. Humanity is improving as a whole and then there’s Chris Brown, tweeting things like this, 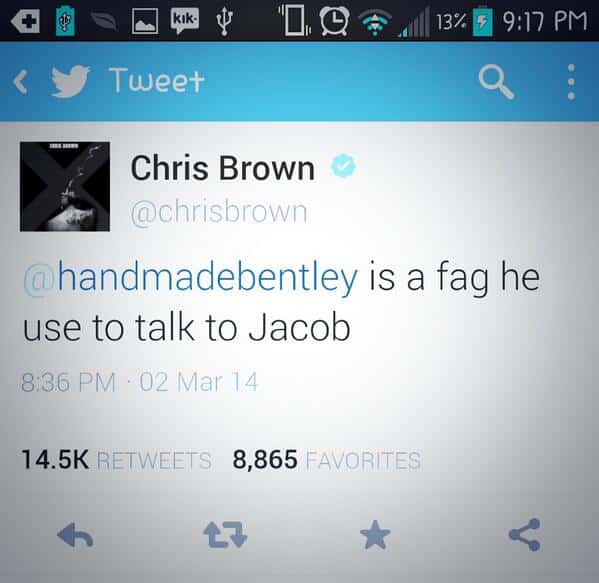 Chris Brown is no stranger to the homophobic slur.The message was aimed at a 17 year old twitter user who lists himself as a CEO in his bio.

The singer removed the tweet quickly, forgetting about the internet police who get paid to watch for regrettable celebrity tweets.

Chris Brown’s Twitter past is worth a review. These are his worst tweets all in one location.

Chris Brown has a history of public homophobia. The artist aimed insensitive commentary at former B2K member Raz-B four years ago on Twitter.

Chris Brown capitalized on the opportunity, making a homophobic reference during an online spat,

Chris Brown later apologized to gay fans and denied being homophobic as he has since discovering Twitter.

Comedy writer Jenny Johnson instigated a 2012 Twitter war with Chris Brown that brought some unfortunate language from the R&B crooner. This zinger aimed at Brown was enough to setup the Twitter firefight.

I know! Being a worthless piece of shit can really age a person. RT @chrisbrown: I look old as fuck! I’m only 23…

Johnson is a popular twitter presence who has a reputation for taunting Brown about a past domestic incident with girlfriend Rihanna. The two hash-tagged it out with the following exchange, 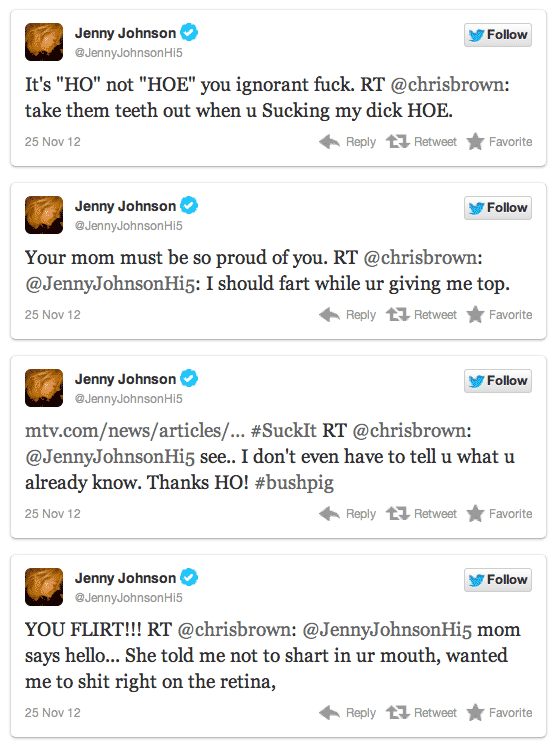 Nobody like a sore loser. A sore winner? That’s even worse. The following Chris Brown tweet aimed at critics is a bit tasteless. Especially coming from a Grammy winner. Come on Christopher! 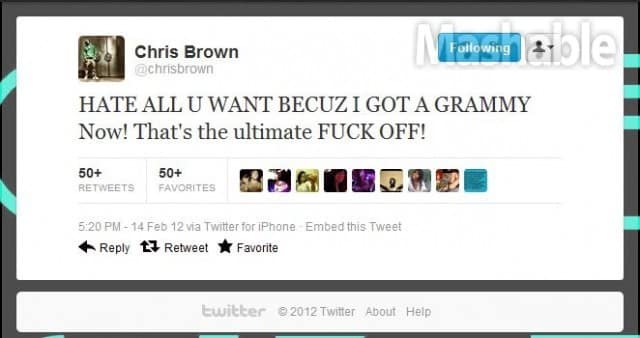 On that same evening, Brown tweeted references to “we select who we hate”.

The singer has questioned why fellow artist Jay-Z’s past involving attempted murder and crack sales is never mentioned by media.

He later removed those tweets as well.

If I were a public relations guy working to rehab the image of a musician notorious for domestic violence I’d have a few rules for my client. Near the top of the list would be this rule:

Never, under ANY CIRCUMSTANCE, make reference to violence as the solution to a disagreement with a woman. NEVER.

Chris Brown didn’t listen when he referred to Cher and her political opinion. 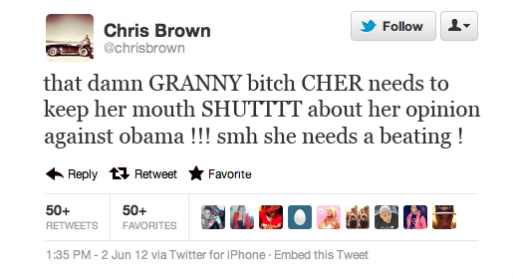