Facebook is a breeding ground for hoaxes, and according to a new post making the rounds, the social network is launching a “No Swearing” campaign on March 20.

Snopes has already labeled the “announcement” false, and here’s what it says:

As of march 20, 2014, we at facebook will be launching a “no swearing” campaign. anyone caught using profanity will have their account locked further investigation.

This due to the new laws issued by our legal department (section 182 P34b) as new advertisers have petitioned for a “cleaner” family friendly social network.

If a user continues to use profanity the account will be shut down and a permanent ban will be placed into effect immediately.

As if the grammar issues weren’t enough of a dead giveaway, the photo also has “campaign” misspelled: 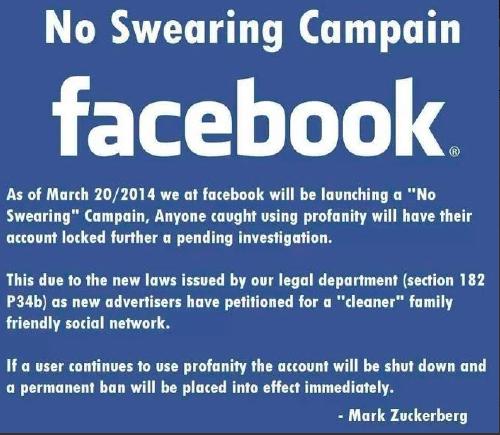 Facebook has not made any such announcement, and if you see any friends fall for this hoax, please give them a virtual kick in the ass.