I’ve never seen this episode of iCarly… A scandalous photo of Jennette McCurdy in her underwear leaked onto the internet today. 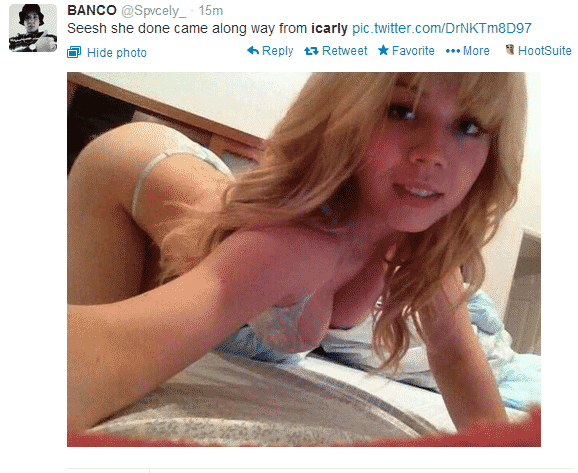 It’s unclear where the photo came from but I doubt the former Nickelodeon star is happy to see it on the internet. McCurdy has a good girl image thanks to her show iCarly and unlike other former Nickelodeon / Disney stars she hasn’t been trying to shed that image.

Jennette McCurdy’s scandalous lingerie photo did hit the internet at an interesting time and if you wanted to draw unfounded conclusions from half facts you could guess that the actress’s former boyfriend, Andre Drummond, leaked the photo to the internet.

But let’s not throw any accusations around. After all, according to Hollywood Life the two only dated for a short time and never really found a physical connection with one another.

McCurdy said: “My first kiss with him was after we had gone laser tagging. I stood on a chair… I sort of went for it. But it wasn’t great. It didn’t go great. No sparks and the mouth… the shapes weren’t right.”

So maybe the photo was hacked? Maybe McCurdy accidentally hit reply all? Maybe it isn’t even her in the first place. Regardless of where the photo came from, iCarly fans are pretty happy about it.

Remember Sam from ICarly? Well maybe not like this…lol pic.twitter.com/M7OnLqgBNK