Ellen DeGeneres hosted the Oscars last night, and took home the award for most retweeted photo of all time thanks to a pretty fantastic super selfie.

The photo, which currently has over 2.8 million retweets, was taken with a Samsung smartphone, and what appeared to be the Galaxy Note 3.

Samsung was a major sponsor of the Oscars, so it was no surprise they wanted the host pimping it out throughout the show.

Behind the scenes was a different story, and DeGeneres was caught red handed tweeting from an iPhone. 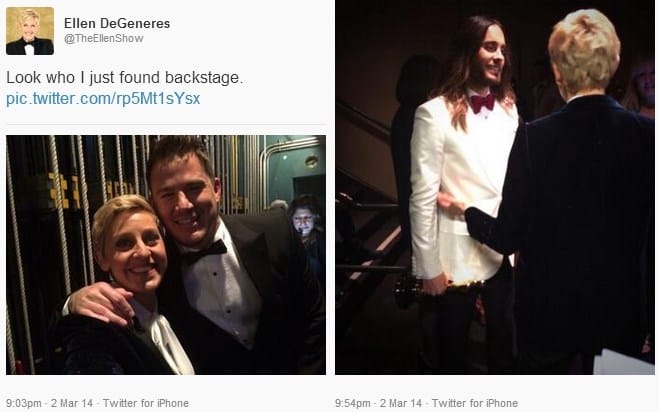 Gasp! How could Ellen repeat the same mistakes such as Oprah who endorsed Microsoft’s Surface tablet, yet tweeted about it from an iPad?

Twitter had a heyday with the discovery, and virtually every single tech blog ran the “shocking” story.

It’s funny how at the Oscars Ellen was taking selfie pics with the promoted Samsung phone but backstage tweeted with her preferred iPhone.

Example, all any one can talk about is how Ellen really uses an iPhone and not a Samsung.

Ellen clearly made a big mistake, right? Well, not really. You see, celebrities endorse products all the time that they don’t actually use.

Does Diddy drive a four-door Fiat? Do the Kardashians buy clothes at Sears? Does hearthrob John Stamos only eat a specific brand of yogurt? Probably not.

Just because you get paid to endorse something, doesn’t mean you use it in real life, nor do you have to unless there’s certain agreements put in place.

Ellen DeGeneres using two different smartphones while endorsing one doesn’t say anything about the endorsed product at hand, other than she has her own personal preference.

Also, celebrities often have assistants, and last night’s Oscars “mishap” could have likely been the work of someone helping Ellen while she had to stay focused on a multi-million dollar production.

@JasonAbbruzzese Also could have come from someone else’s iPhone w/ access to Ellen’s acct. Her tweets were coming from several platforms