You love him or you hate him, or you just wish everyone would stop talking about him, but it doesn’t matter, Justin Bieber will find a way to affect your life. Today, J-Beebs, as I hear the kids are calling him, shut down Instagram with his super celebrity powers.

The Canadian Pop-Star and current media obsession posted a picture of his ex-girlfriend and fellow young celebrity Selena Gomez, and predictably the Beliebers went crazy. Speculation instantly started that they were getting back together, or whatever.

The important thing is that the spike in traffic Bieber drove to the site possibly brought the site down for a lot of users today. At around 10:54am EST, users started going on Twitter asking if Instagram was down. It lasted for about 20 minutes before the service was reportedly restored. Some users were still complaining about slow loading feeds and that they were unable to upload their photos at 11:15 EST but it appears to be definitively back up now.

It isn’t confirmed that Bieber was the actual cause of the shutdown, but the timing makes sense. 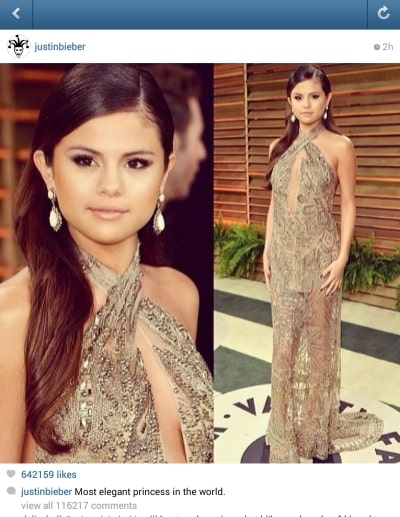 So that is another thing you can blame Bieber for, if you are apt to attack the teen idol for things. If you are interested in the whole Bieber, Gomez relationship thing, he reportedly called his ex girlfriend the “Most elegant princess in the world.” So take that as you will.

Someone, somewhere, will keep you informed on Bieber news, I’m sure of that. Hopefully it won’t be me.