Facebook Shares Slide Below $20 For First Time In Weeks

Facebook shares couldn’t hold onto their recent rebound and fell below $20 in early trading on Wednesday, marking the first time in weeks that the social networks shares have slid below the $20 sell point. Shares were selling at $19.80 in early morning trading.

Shares at the social network have been on the decline for the last week after Barron’s claimed Facebook stock should be priced around $15 to avoid overvaluation.

Facebook stock prices have also been hurt by an IDC report in which most developers claimed a mobile-first startup in the social network space, along the lines of Path would “likely to very likely” steal market share from Facebook.

$19.80 is still better than the company’s all-time low of $17.55 which was reached at the start of this month. The company’s investors eventually pushed share prices to $23 after CEO Mark Zuckerberg said he would not sell any of his own stock for at least one year.

At current stock prices Facebook CEO Mark Zuckerberg is worth $10.1 billion, far less than his $19.1 billion in wealth at the time of the company’s $38 per share IPO. 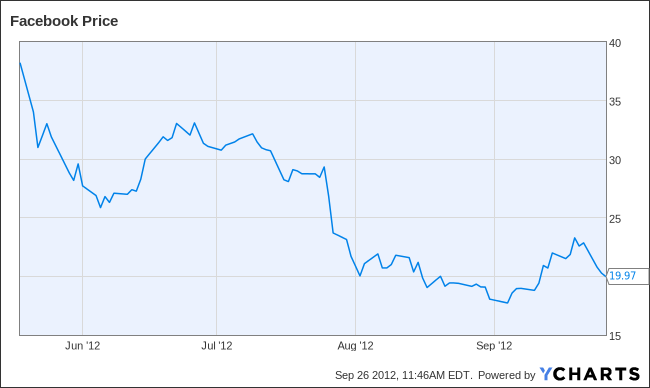