Archos’ Water Resistant Phone Is Soaked In Bad Publicity By...

by Ian DeMartino 9 years ago4 months ago

If you are the CEO of a company that produces durable phones meant to survive harsh conditions, it is probably a good idea to be aware of the differences between “water resistant” and “waterproof” especially if you are about to showcase your new phone’s capabilities.

Archos CEO Loic Poirier learned the difference the hard way in what has to be one of the most embarrassing videos for any mobile company. Poirier decided to show off his new phone’s capability by placing it in a glass and then filling it with water. It would have been an impressive display of the phone’s capabilities, if the phone had that capability. The Quechua Phone 5 has a IP54 rating, making is resistant to splashing, but not dunking.

Waterproof and water resistant phones have been all the craze at the Mobile World Congress, with Sony showing off actual waterproof phones and tablets that can be washed in the sink and held underwater for 30 minutes as long as all the ports are closed. Perhaps Poirier got confused about which technology company he is working for?

One last note: I love his grin at 42 seconds, right before he realizes his phone isn’t going to work. It’s filled with confidence, maybe even a little arrogance and then a second later, disaster. 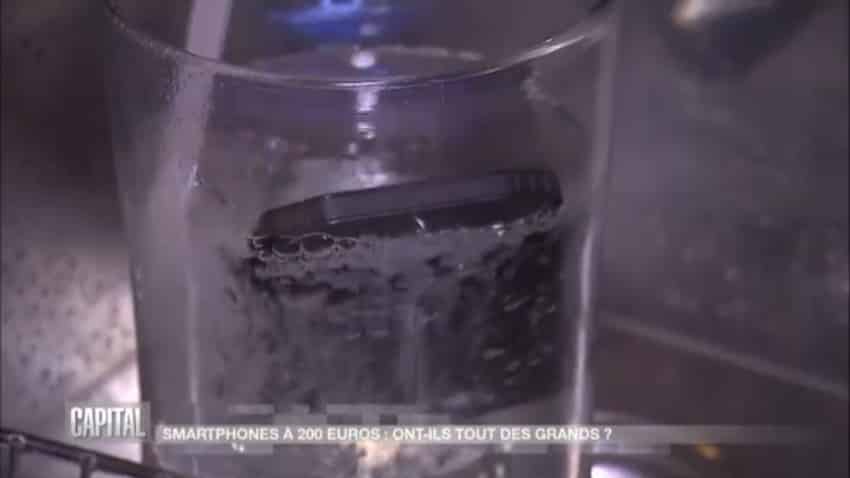 The comments on Reddit have been, well, as you would expect from the internet.

User cellur111 wonders about the quality of Archos devices to begin with:

He later returned to the forum to help speculate on how Apple would respond to the threat that is Archos’ revolutionary water absorbing phones:

But the best comment of all belongs to TurboTab, he mentions the other products being tested by the Archos CEO