Second Screen Experience: Why Social Is Winning Over TV Viewers...

If you’re a fan of the television show Community you might want to take a moment and thank the folks at Twitter for keeping your favorite show alive and kicking. While Community debuted to decent reviews, the massive audience typically needed to keep the show on-air wasn’t available. However, fans of the series often caused the show to become a world wide trending topic on the micro-blogging service. In some cases even two trending terms were associated to the show at one time.

TV network NBC quickly realized that Community had a hyper-targeted demographic that it could track and exploit on Twitter, Facebook, and other social networks. The second screen experience in essence became the shows longevity. According to the team at Television Fanatic, “the second screen experience allows TV networks to gauge involvement in the show, while also utilizing discussions to attract new advertisers. A brand is more likely to spend money on a show when they understand the direct demographics associated with the series, and the allegiance that demographic brings to a specific television series.”

The second screen experience isn’t just about commenting on a show after it airs, it also allows users to engage in real-time as they watch the newest episode of Law Order or CSI. Fans try to figure out crimes amongst other viewers and even talk about potential future episodes. Essentially Twitter, Facebook, and other social networks, have created a community of engaged viewers who want to take their conversations away from their living rooms. It is that engagement that then allows networks to target future commercial ad sales at higher price points, which in turn allows lower-rated shows with highly engaged audiences to stay on air.

The increase in the importance of second screen technology isn’t just limited to already established networks. In fact, dozens of apps have flooded the market with the sole purpose of attracting second screen discussions. For example, the application “Tvtag” (formerly GetGlue), allows users to search for shows, discover new shows, and even browse recommendations from other users. Just like Foursquare users can check-in to a show, and discuss their favorite series and specific episodes. Tvtag connects with your favorite social networks which in turn adds tremendous value to a users experience. 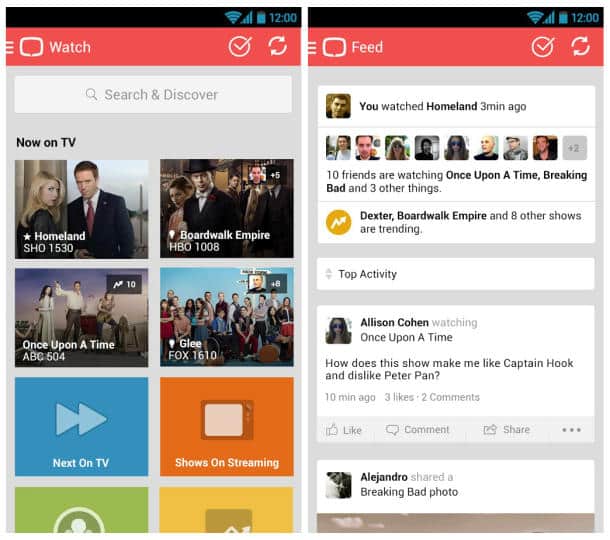 Even music is now being introduced to the second screen experience on a more prevalent level. Take for example Shazam, the service known for its music discovery application. Simply hold your device close to your TV to discover the artist of the song you are currently listening to. Some TV shows are even beginning to feature the Shazam logo in the bottom right hand side of their shows. When the logo shows up you can hold your device up to your TV for more information. Television Fanatic claims that “TV shows are helped along by second screen technology because of new revenue streams that they can easily generate. Producers now have the power to not only attract revenue on the living room TV, but also via secondary channels that were not previously made available for viewers.” 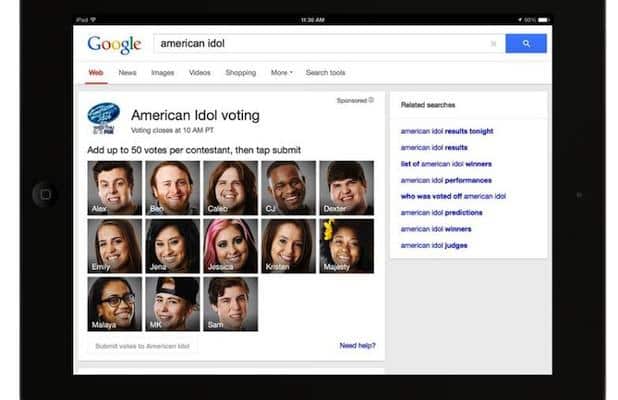 Early today I reported on a new deal reached between the producers of American Idol and the teams at Google and Facebook. On Google users can now vote for their favorite contestants by simply conducting an American Idol search for any term related to the show. Fans can then join in community conversations, participate in Google Hangouts, and much more.

On the other end of the spectrum Facebook allows users to see a snapshot of demographic voting in real-time as the show kicks off the live voting round.

Google and Facebook highlight the future of interactive TV, a future in which anyone with a mobile device, tablet, or readily available smart TV or desktop computer, can participate with other fans of shows. Fan polling, real-time conversations, and other metrics are not a very real part of the landscape.

Platforms like Television Fanatic, TvTag, Shazam, and many others are helping sculpt a new landscape in which users can easily discover new shows to watch, find their favorite shows online, and even discuss those shows in real-time. It’s no wonder that Twitter joined forces with Nielsen Ratings, and YouTube even went so far as to broadcast the most recent Summer Olympics in real-time for select countries that did not already have broadcast rights in place.