When American Idol first breached the airwaves users were required to send a text message when voting for their favorite contestant. Fast forward 13 seasons later and the Fox TV show has grown into the social media and search space. Producers have announced a new voting system that allows web users to cast their votes directly through Google, while gaining a better understanding of voting trends via Facebook.

American Idol will finally start airing the top 13 finalists tonight and America’s vote will matter in a new and excite way.

Starting on Wednesday night, American Idol fans will be able to vote via Google Search. Anytime an Idol fan searches for an “Idol-related term” a voting window will show on the Google search page. Fans can perform up to 50 searches and vote for their favorite contestant up to 50 times per live airing. Fans can then share their votes with their Google+ profiles. As an added bonus Google has made it easy to follow contestants on Google Plus, and also to join in community conversations, and participate in live Google Hangouts.

On Facebook American Idol fans will have the option to check out on-air visualizations throughout the show. Those visualizations are presented by way of real-time East Coast voting trends. The Facebook information includes demographic voting, relative contestant rankings, and other information. What Facebook won’t show is the leaders in vote count, a surprise that will remain hidden until the following nights elimination show.

Here’s the Google voting system for American Idol as shown to desktop users: 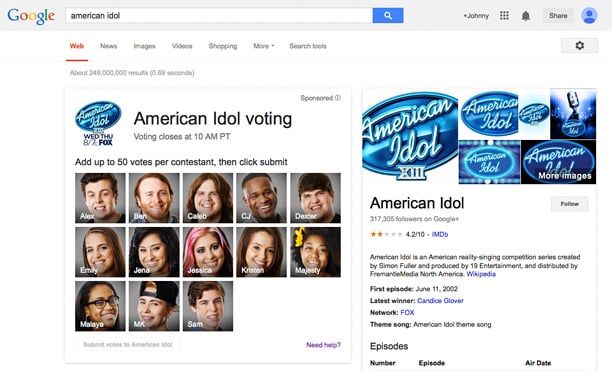