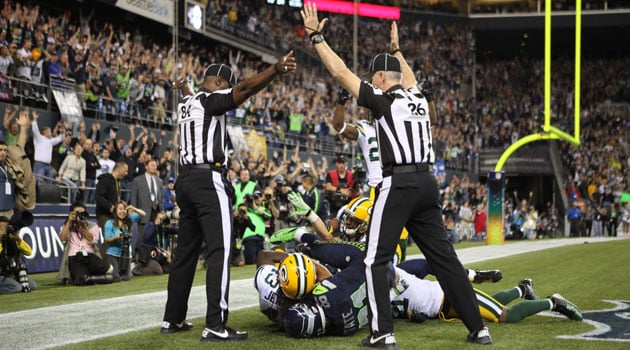 T.J. Lang, along with most NFL fans, voiced his frustration with the NFL replacement refs on Twitter after Monday Night Football. Lang’s tweet has been retweeted more than 80,000 times and could soon become the most retweeted tweet in history.

Fuck it NFL.. Fine me and use the money to pay the regular refs.

With more than 80,000 retweets, Lang’s tweet currently ranks third on the all-time list. Floyd Mayweather Jr. holds the all-time record (with a little help from Justin Bieber) and the Biebs himself sits in second.

Lang’s tweet has been building its numbers all morning. And since the anger with the NFL replacement refs doesn’t seem to be fading Lang could soon pass Mayweather’s 92,000 mark.

The NFL has been using replacement refs for the entire 2012 season. The refs have been ridiculed by players, coaches, and fans for how they have officiated games this season but everything seemed to explode last night when they botched a call at the end of the Green Bay Packers / Seattle Seahawks game.

At the end of the game, one ref called an interception and the other called a touchdown. After that, all Twitter broke loose.

The dispute between the NFL and the NFL Referee’s Association is basically about money. Lang is apparently ready to pony up the dough to make sure that incidents like the one above never happen again.

The world is devastated by the news that Britain’s Prince Philip, the Duke of Edinburgh, has died at the age of 99. Palace media confirms that the Duke has expired mid-day today, April 9th. The announcement did not contain any specifics on the cause of death. The United Kingdom will enter a state of national… END_OF_DOCUMENT_TOKEN_TO_BE_REPLACED

Who would have known that religious prophets would be among the most loyal supporters of former President Trump? In fact, it has been observed that the most conservative Christians may have been the right amount of push for Trump’s presidential win back in 2016. Since Trump’s election back in 2016, numerous self-proclaimed “prophets” have been… END_OF_DOCUMENT_TOKEN_TO_BE_REPLACED

President Biden falls and slips multiple times on the Airforce One Steps and PEOPLE ARE GOING CRAZY! What’s the big deal? Some people are hating, while others are making memes just for the fun of it. We are all human, aren’t we? Everyone’s expected to stumble some time in their lives. However, with the internet… END_OF_DOCUMENT_TOKEN_TO_BE_REPLACED