Facebook CEO Mark Zuckerberg has been the subject of many conversations, good and bad, but a cartoon accused of being anti-semitic may just be a new one.

Sueddeutsche Zeitung, a German newspaper based out of Munich, recently ran a cartoon that depicted Zuckerberg as an octopus snatching up everything around him. 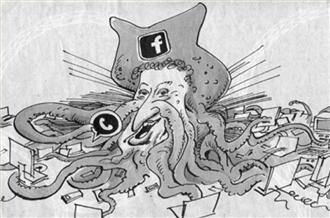 According to cartoonist Burkhard Mohr, his intent was characterizing Facebook’s acquisition of WhatsApp.

However, Jewish groups felt it resembled propaganda created by the Nazis, and prompted Mohr to apologize.

Referencing a similar cartoon depicting Michael Bloomberg as an octopus back in 2007, here’s what the Associated Press said:

“The eight-armed sea animal has been used as the Nazi representation of Jewish conspiracy and control, and was referenced by Adolf Hitler in “Mein Kampf.”

Do you think the cartoonist meant to associate Facebook CEO Mark Zuckerberg in such a way or was it just a simple misunderstanding?