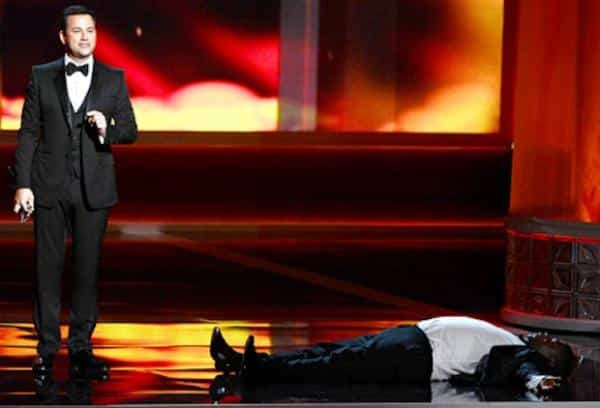 Jimmy Kimmel’s prank last night involving Tracy Morgan, Twitter, and a gullible American public proved a few things to be true: Tracy Morgan will do anything for a laugh, Jimmy Kimmel is a shameless self-promoter, and Twitter is the fastest way to spread misinformation.

During the show last night Kimmel brought Morgan up to the stage and asked him to lie down. After removing his nunchucks from his suit jacket, Morgan sprawled out on the stage. Kimmel then asked the TV audience to tweet “Oh my God – Tracy Morgan just passed out onstage at the Emmys – turn ABC on NOW!”

The “prank” was a thinly veiled plea to get more people to turn on ABC. It’s unclear how large the TV audience grew but according to Twitter TV at least 25,000 people sent out the message within a minute of Kimmel’s announcement.

What did you think of Jimmy Kimmel’s Twitter prank last night?

The world is devastated by the news that Britain’s Prince Philip, the Duke of Edinburgh, has died at the age of 99. Palace media confirms that the Duke has expired mid-day today, April 9th. The announcement did not contain any specifics on the cause of death. The United Kingdom will enter a state of national… END_OF_DOCUMENT_TOKEN_TO_BE_REPLACED

Who would have known that religious prophets would be among the most loyal supporters of former President Trump? In fact, it has been observed that the most conservative Christians may have been the right amount of push for Trump’s presidential win back in 2016. Since Trump’s election back in 2016, numerous self-proclaimed “prophets” have been… END_OF_DOCUMENT_TOKEN_TO_BE_REPLACED

President Biden falls and slips multiple times on the Airforce One Steps and PEOPLE ARE GOING CRAZY! What’s the big deal? Some people are hating, while others are making memes just for the fun of it. We are all human, aren’t we? Everyone’s expected to stumble some time in their lives. However, with the internet… END_OF_DOCUMENT_TOKEN_TO_BE_REPLACED