Facebook acquired messaging service WhatsApp earlier this week in an unprecedented deal worth $19 billion, and it had a lot of people talking.

After all, examining this graph from Statista, we get to see just how big it is compared to other major tech acquisitions: 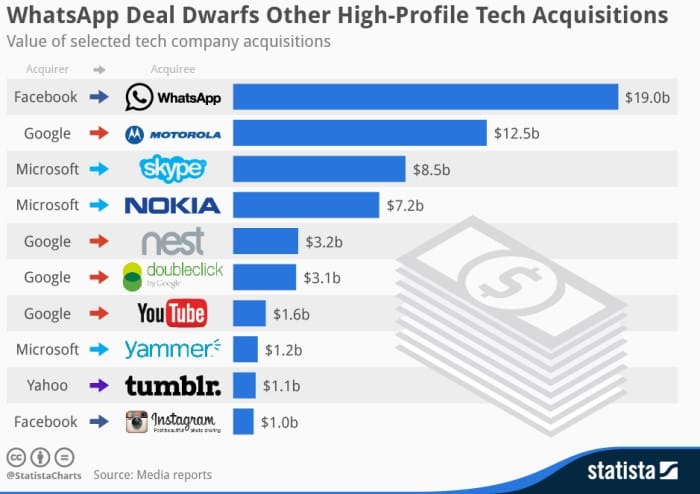 While $19 billion sounds like overkill, here’s the facts about WhatsApp:

And unlike many other acquisitions, which tend to be of a free app/service, WhatsApp charges $1 per user per year.

In total, the deal comes out to around $42 per user. In comparison, Microsoft acquired Hotmail in 1997 for around $40 per user.

Facebook CEO Mark Zuckerberg has publicly stated that WhatsApp will continue to operate independently, and its product plans will be unchanged.

One area of concern was that the service would get loaded with ads, but here’s what Mark had to say:

“I don’t personally think ads are the right way to monetize messaging.”

Does this mean Facebook will abandon the idea? Absolutely not, but WhatsApp has a great monetization plan already going for it.

However, there is a major divide between both services, and begs to question if a compromise will have to be reached, or has already been reached.

It’s no surprise that Facebook wants to know everything it possibly can about its users. The more it knows, the more it can help advertisers and the more money it makes.

On the other hand, WhatsApp doesn’t care for all that.

Here’s what CEO Jan Koum recently said in an interview with Wired:

“People need to differentiate us from companies like Yahoo! and Facebook that collect your data and have it sitting on their servers. We want to know as little about our users as possible. We don’t know your name, your gender… We designed our system to be as anonymous as possible.”

With Facebook now the owner of the world’s hottest messaging app currently out there, will WhatsApp have to give in, and appease the data-driven overlord?

Or, will WhatsApp stand its ground, and continue building out its service in the vision it sees fit?