by Mike Stenger 8 years ago2 months ago

Comcast was reported to be acquiring Time Warner Cable in an all stock deal, and today confirmed the big news.

The deal is worth around $45.2 billion, and still requires government approval.

With Comcast and Time Warner Cable being ranked among the worst ISPs for customer service, it comes to no surprise that many Twitter users weren’t too pleased:

Stop Comcast stop this time warner merger. It is bad for all!

Comcast is taking over Time Warner? Great now all they need to do is hire Congress as sales reps so all our hate can have once source

Sorry, all Time-Warner subscribers – you will now personally witness how us Comcast subscribers constantly suffer from sub-standard service.

The deal has even sparked the creation of a White House petition asking the government to not approve the merger: 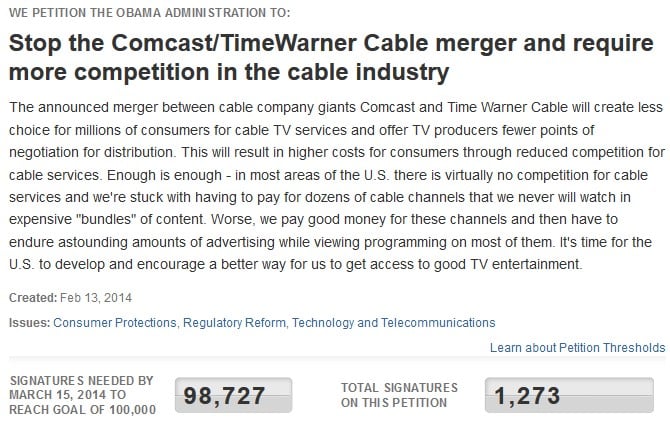 Government approval will be difficult even without petitions due to Comcast being the number one cable company in America, and Time Warner Cable taking the number two spot.

Twitter user Jack McCloy believes if the deal goes through, it will prompt people to switch to alternatives:

Comcast buying TWC has > risk than most think. At that size, the hate people have for each will > incentive for people to find alternatives

However, with Comcast already accused of operating a monopoly in cities and towns across the United States, finding an alternative could be incredibly difficult.