First off, that man is actor Jeff Goldblum, and he’s the greatest man to ever walk the face of the earth. Second, he’s dominating your timeline right now because a loose viral movement called “Occupy Facebook” kind of got away from its creators.

“Occupy Facebook” originally sought to replace “pictures of sushi lunches” and other social media staples with pictures of art. It was a noble (though slightly snobby) attempt, but the trend has since been hijacked by people who’d rather make Jeff Goldblum go viral for absolutely no reason because that’s how the Internet works. 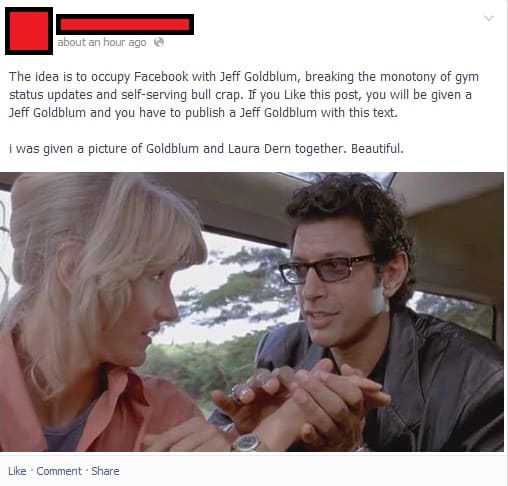 To hop on the “Occupy Facebook” Jeff Goldblum trend, all you have to do is post a photo, video or GIF of the actor to your page with the following message:

“The idea is to occupy Facebook with Jeff Goldblum, breaking the monotony of science, politics, and the Olympics. If you Like this post, you will be given a Jeff Goldblum and you have to publish a Jeff Goldblum with this text.”

If you’re looking for a good Jeff Goldblum to share, allow me to make a suggestion:

You’ll be the most popular person to take part in “Occupy Facebook: Jeff Goldblum Edition” ever!