Derek Jeter is saying goodbye to professional baseball. The Yankess All-Star announced his retirement on Facebook today, saying that the 2014 season would be his last.

Jeter starts his message by thanking his fans for allowing him to live out his dream.

Jeter writes: “I want to start by saying thank you. I know they say that when you dream you eventually wake up. Well, for some reason, I’ve never had to wake up. Not just because of my time as a New York Yankee but also because I’m living my dream every single day.”

Unfortunately, the dream will be coming to an end after the 2014 season. Jeter writes that he made the decision after struggling with injuries for several years.

The Yankee writes on Facebook: “Last year was a tough one for me … As I suffered through a bunch of injuries, I realized that some of the things that always came easily to me and were always fun had started to become a struggle. The one thing I always said to myself was that when baseball started to feel more like a job, it would be time to move forward.”

Jeter, who will soon be turning 40, has been the starting shortstop for the New York Yankees since 1996. So what will Jeter do after nearly 18 years at shortstop?

Jeter said that he has “dreams and aspirations” for both business and philanthropic endeavors. In the meantime, however, he’s just going to soak in his final season.

Jeter writes: “I want to soak in every moment of every day this year, so I can remember it for the rest of my life. And most importantly, I want to help the Yankees reach our goal of winning another Championship.”

You can read Derek Jeter’s full Facebook message below.

Shortly after posing about his retirement, Yankees fans flocked to Jeter’s page to thank him for all he’s done for New York City. 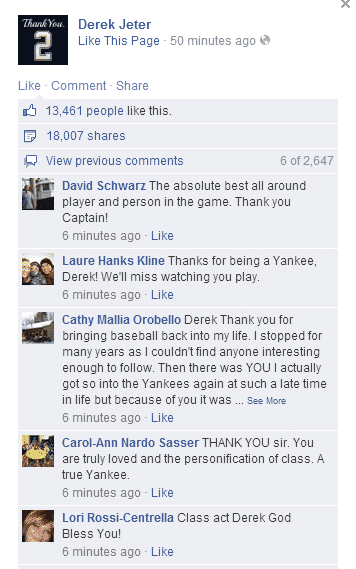